A comet creates its own snowstorm!

NASA has just released new results and images from the EPOXI spacecraft's visit to the comet Hartley 2 from November 4... and like the previous ones, these are absolutely stunning jaw-droppers. What scientists have found is that the comet's solid nucleus is sitting in the middle of a veritable snowstorm! Wow! Most of those dots are not stars: they are actual snowballs, frozen matter that has been ejected by the comet itself! They range in size from a few centimeters to a few dozen across, so they really are about the size of snowballs you'd use in a snowball fight... or to make a snowman. But I wouldn't recommend it: a lot of that material is not frozen water, it's actually frozen carbon dioxide, or dry ice. As I wrote a few days ago, the comet nucleus -- the solid part of the comet at its heart -- is only a couple of kilometers across, and composed of rock, water ice, and dry ice. As the nucleus gets close to the Sun, the dry ice turns directly into a gas and spews out of vents in the surface. These plumes of material shoot out, enveloping the nucleus to become the fuzzy head of the comet, and stream away to form the tail.

But we've never been close enough and had good enough images to see just what these plumes look like in detail... until now. It's not just gas, but actual chunks of ice flying out from the nucleus! The comet, for all intents and purposes, is having its own cosmic snowball fight. As you can see in the cleaned picture on the right (click to ensublimate) the comet is sitting in a cloud of thousands, millions of these snowflakes.

How awesome is this?

In fact, so much material is blowing out from the comet that the nucleus is able to cast a shadow in space: Oh my. How lovely.

But there's far more than just gorgeous pictures. A lot of science has come from this mission. For example, I noted in an earlier post how the comet shape is weird: it's a peanut, with two roughly-surfaced lobes connected by a smooth waist. What the heck is that all about? Why are the two lobes so different in texture than the connecting waist? Well, EPOXI's close flyby allowed scientists to determine that the material coming from the lobes is mostly carbon dioxide (which is dragging water ice with it), but the material making up the smooth region is mostly water! This must be a clue to what's going on... but what, exactly? Well, we're not sure!

As the material is blown out of the nucleus, some of it falls back and gets deposited on the surface. The gravity of the nucleus is pretty funky, given its shape, so it's possible that the dust that comes out falls back onto the waist region preferably. That may block the sunlight from heating the surface, preventing carbon dioxide from warming up and venting. Or it's possible that all the carbon dioxide is simply used up from the waist region due to processes that haven't been figured out. Maybe there never was any in the first place, and its concentrated more in the lobes.

There is one thing we know for sure: every time this comet loops near the Sun on its orbit, it loses a lot of material. In fact, it may shrink in size by as much as a meter or so every 6.5-year orbit! In other words, we're catching this comet near the end of its life: in a hundred or so more passes, the material in the waist will shrink to nothing, and the two lobes will fly free, their tether to each other severed. Then we'll have two comets (plus a lot more debris), each slowly decaying as they spew matter into space. This whole object may only last a few thousand more years, after surviving for billions of years in the solar system.

This, too, shall pass.

While that may be sad for Hartley 2, it's a bonanza for scientists. We're learning more about comets every day, and the knowledge gained from this one flyby will keep scientists busy for a long time to come. Or, at least, until we see another comet close up.... in 2011.

Here are some other images of the comet Hartley 2. Use the thumbnails and arrows to browse, and click on the images to go through to blog posts with more details and descriptions. 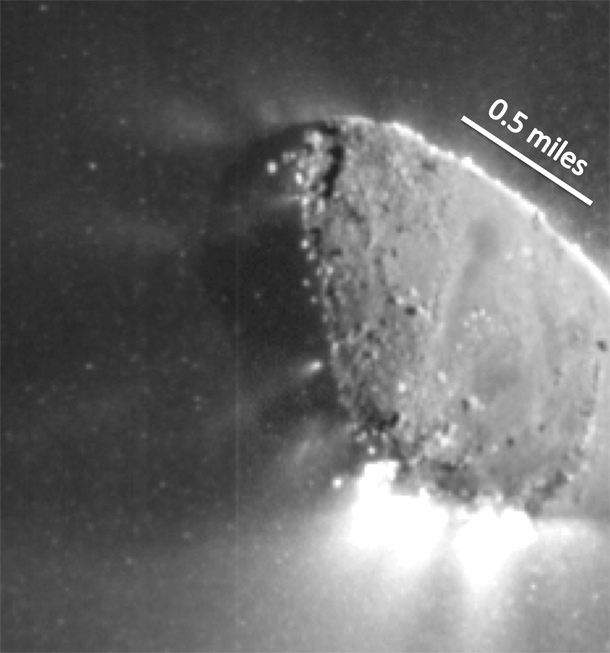 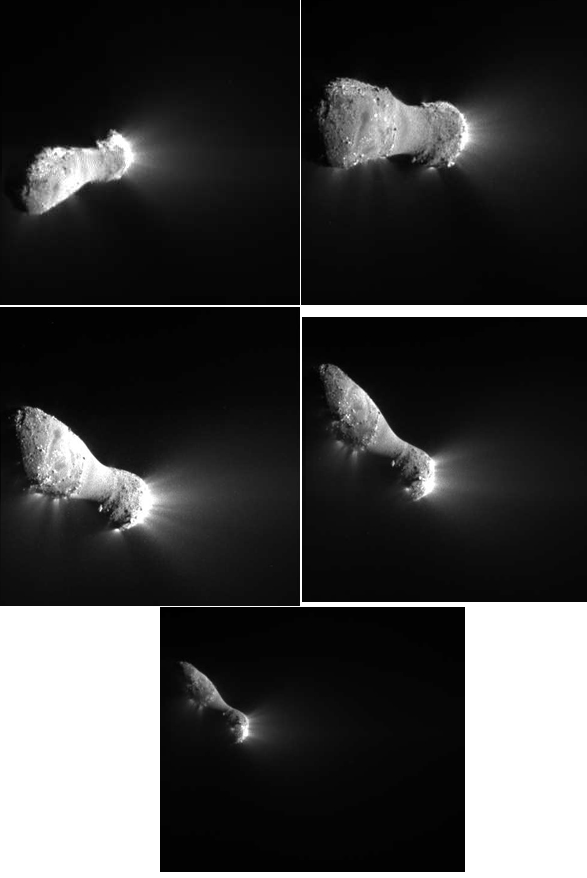 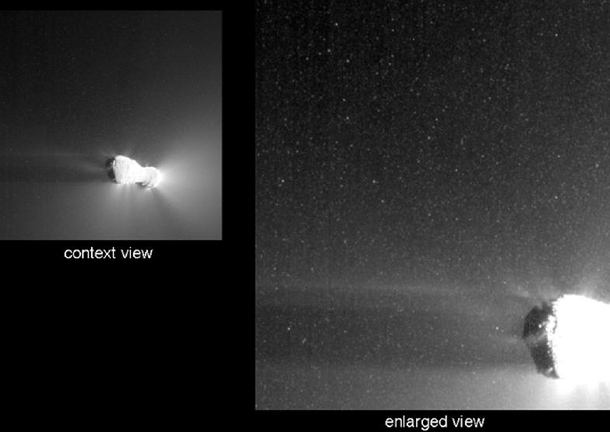 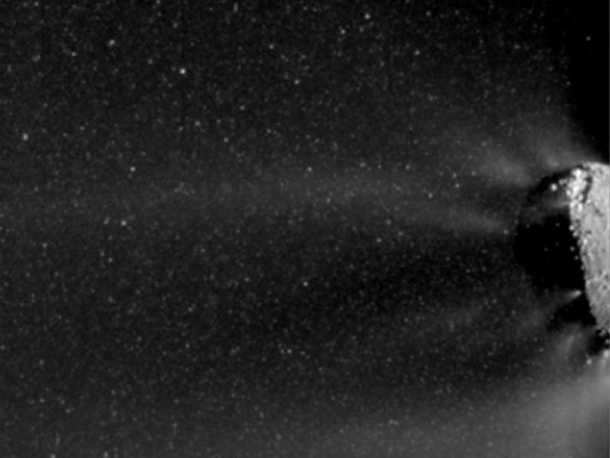 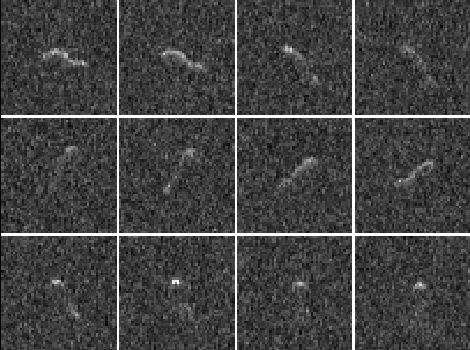 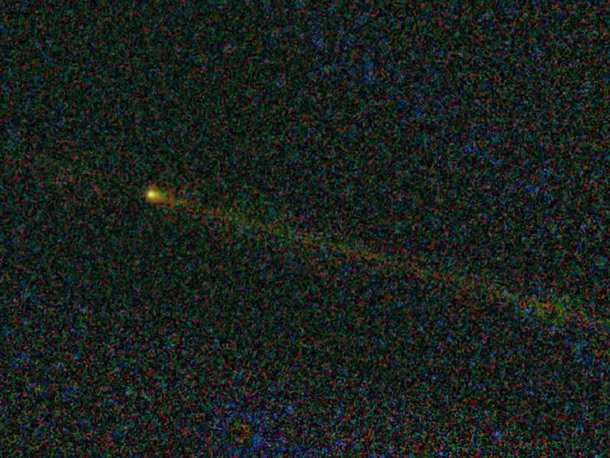 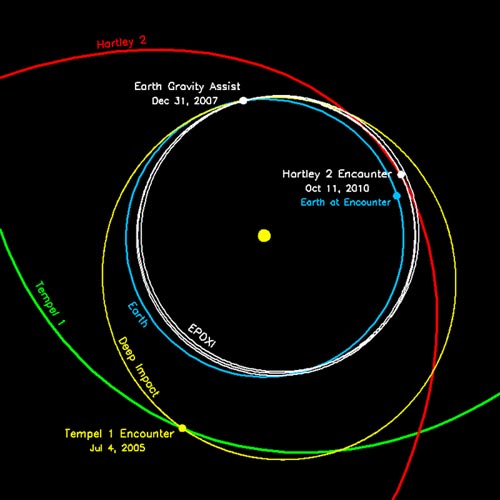