In the heart of the Large Magellanic Cloud (one of the Milky Way's many satellite galaxies), there lies a vast complex of gas called 30 Doradus. And inside that sprawling volume of space is the Tarantula Nebula, a star-forming region so huge it dwarfs even our own Orion Nebula. Thousands of stars are churning away in there, going through the process of being born.

And as they do, the hottest and brightest of them carve huge cavities in the nebula, heating the tenuous gas therein to millions of degrees. The result? This: I love this image! It's a combination of observations from the Chandra X-Ray Observatory (in blue, showing the incredibly hot gas) and from Spitzer Space Telescope (in red, showing cooler gas). Those bubbles of hot, X-ray emitting gas are constrained by the cooler gas around them, but it's likely the hot gas is expanding, driving the overall expansion of the nebula itself. However, it's also possible the sheer flood of high-energy radiation from the nascent stars is behind the gas's expansion... or it's a combination of both. Astronomers are still arguing over this, and observations like this one will help figure out who's right.

... but you know me. I love pareidolia, and there's no way you can look at this image and not see a really angry screaming face, shrieking at that blue blob hovering in its way. That's so cool!

And c'mon, NASA: you release this image two weeks after Halloween? Oh well, I'll add it to my scary astronomy gallery anyway, which is after the jump below.

The flaming skull of Perseus 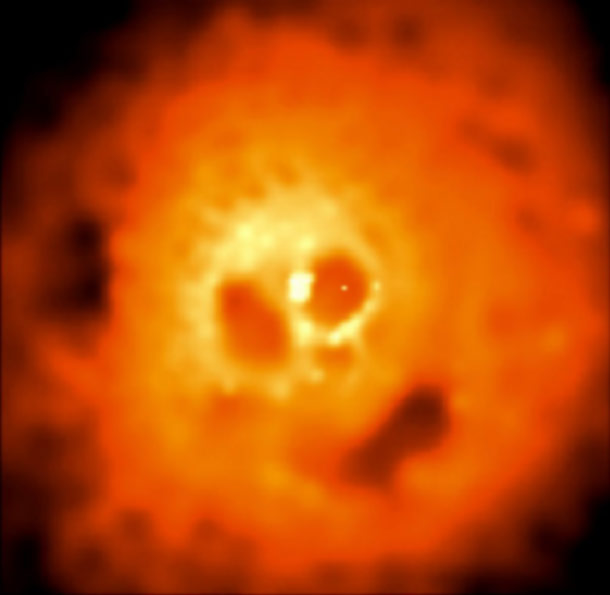 Is this a moaning skull, aflame with Halloween madness?

Actually, it's something far scarier: a gigantic black hole gobbling down matter and spewing out vast amounts of high-energy radiation.

In the heart of the Perseus cluster of galaxies lies the monster Perseus A, a huge galaxy that is blasting out X-rays. In this image by the orbiting Chandra X-ray Observatory, the galaxy is between the two "eyes", which are most likely gigantic bubbles of gas expanding away from the supermassive black hole at the heart of the galaxy. Those dark regions are each half the size of our own Milky Way galaxy, 100,000 light years across! 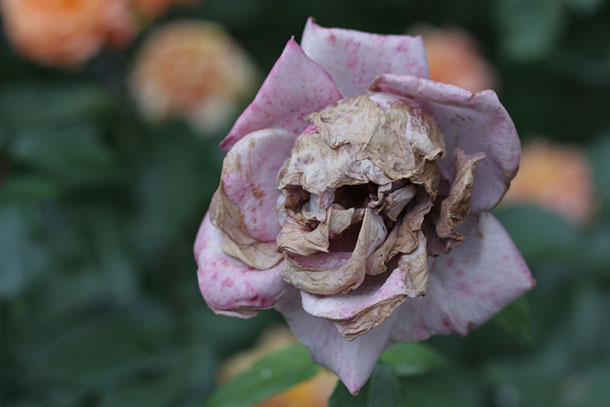 A rose, by any other name, would smell... like rotting corpses. Ewwww. 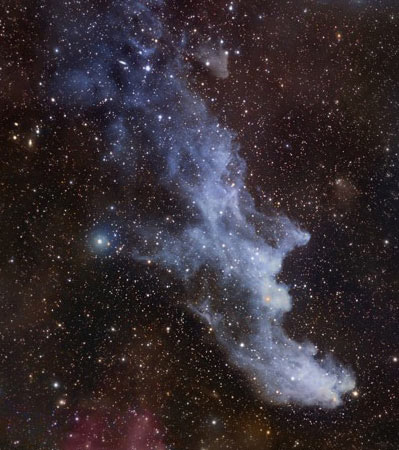 The knee of Orion is marked by the bright star Rigel, and just off to the side is the large glowing Witch Head nebula, which really does look like a classic depiction of a hag's face: open-mouth, scraggly nose, deep eyes, gaping as she looks off to the right.

This image was taken by astrophotographer Rogelio Andreo, and was a small piece of a vast Orion mosaic he made. It was so incredibly beautiful that I picked it as my Number 1 Astronomy picture of 2010. 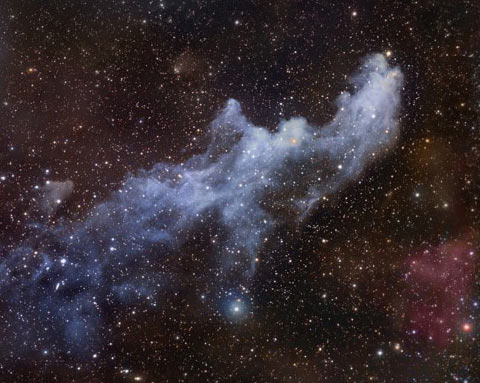 What scares a ghost? Something must have frightened this poor guy, since he's running for his... uh... life? Death? Whatever.

This is one of my favorite nebulae in the sky, and if it looks familiar, it should: in a bizarre - and literal - twist of fate, it's actually the picture of the Witch Head Nebula turned sideways!

I love that you can take an astronomical picture related to Halloween, turn it 90 degrees, and get a different Halloween picture! Turn your head to the left to see the Witch.

Original blog post: The Top 14 Astronomy Pictures of 2010
Spectre of the star 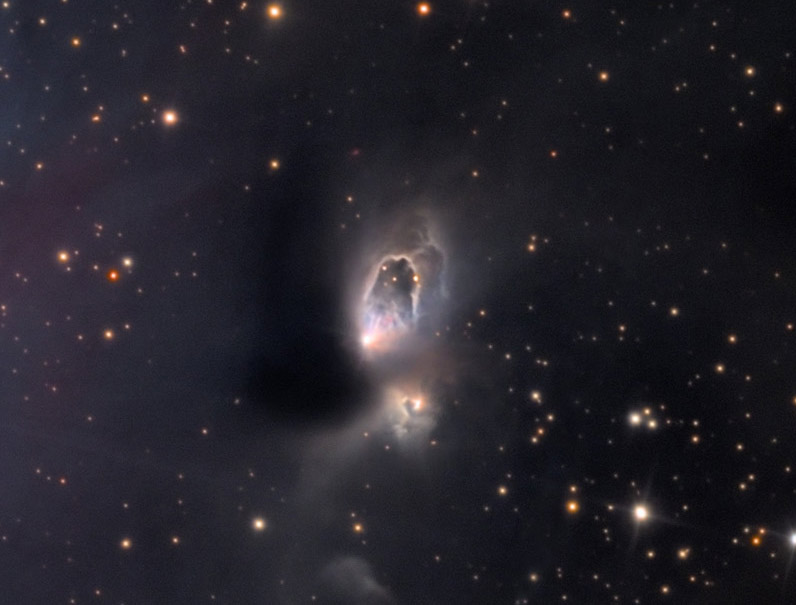 Adam Block is a fantastic astrophotographer, using the 0.8 meter Schumann telescope in Arizona to take incredible images. This one shows gas and dust around the very young star V633 Cas, still in the throes of birth. When human babies are born, they scream, and from the looks of this star it is, too. But oits age is estimated as more than 30,000 years, which is a long, long time to wail...

This is a small part of a much larger and fantastically beautiful image of the region around the nebula vdB1, and I really recommend you take a look. It's breath-taking. 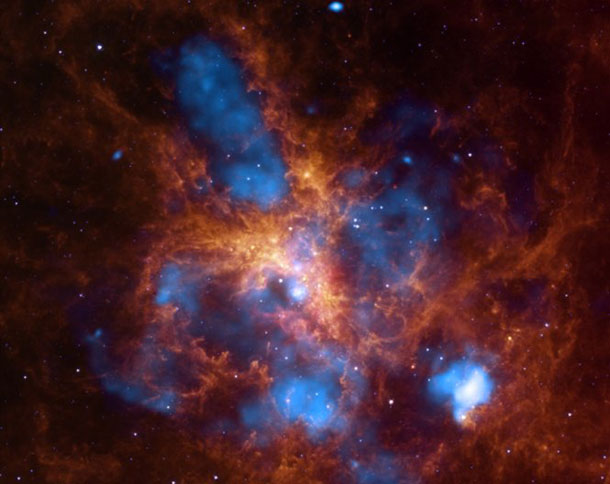 160,000 light years from home, the Tarantula nebula (how's that for a Halloweeny name?) is a factory cranking out thousands of stars. Some of these stars are so luminous they have heated the gas to millions of degrees, and this expanding hot gas (in blue) has pushed open bubbles in the cooler gas around them (red).

And if that were happening inside of you, I imagine you'd be screaming in fury as well.

Man, that is one ticked off nebula. I'm glad it's so far away. 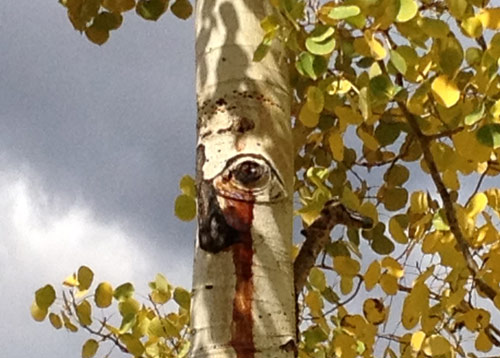 In 2012, my wife and I hosted a group of science enthusiasts to a vacation at the C Lazy U dude ranch as part of Science Getaways - vacations with extra bonus science added. While out on our biology hike, we saw vast groves of aspen trees, and learned that they reproduce themselves by sending up runners from their rooots - clones, essentially.

One, though, must've suffered an error during the DNA transcription. Unless there's some evolutionary benefit for an aspen tree to have a bleeding eye in its trunk.

And if that's the case, I don't think I wanna know. 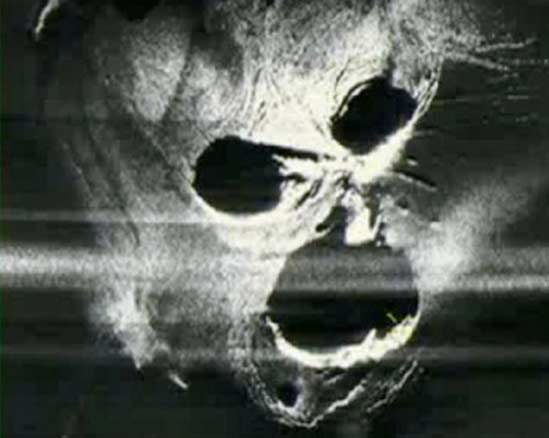 This seriously disturbing image is not actually a photo, and it's not actually an astronomical object! It's an image of the Eyjafjallajökull volcano in Iceland when it was erupting in 2010, made using radar observations.

But c'mon, look at it! How could I not include it? 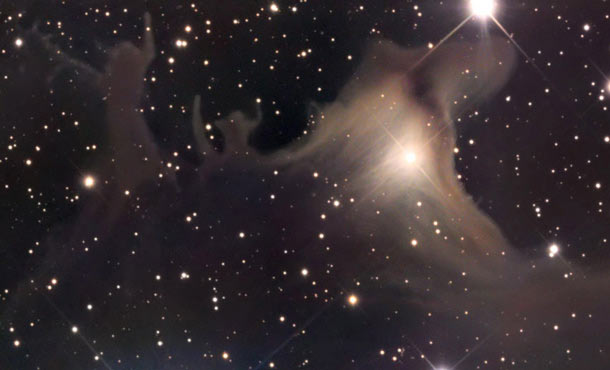 Even in space, you can't escape Halloween! I'm not sure what it is on the right that's chasing those two poor, terrified people running away with their arms up in the air, but it must be really scary.

This is SH2-136, a Bok globule, a dark blob of gas that forms stars deep within. Parts of it are lit up by nearby stars, allowing us to witness this act of cosmic trick-or-treatery. 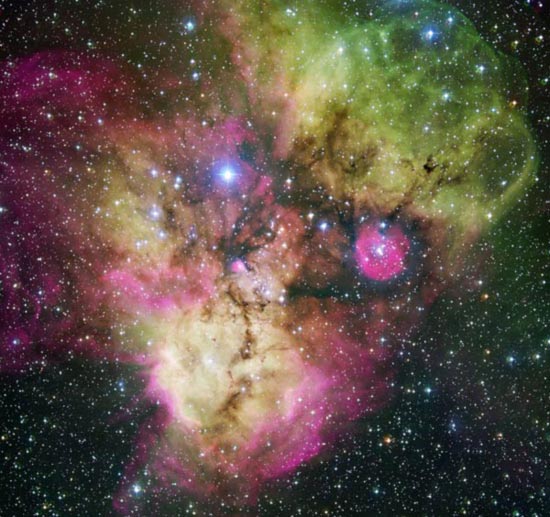 A vast cloud of gas surrounding two huge clusters of stars stares at you, glaring, knowing you should be working and not reading Halloween blogs.

Or is that your conscience speaking? This is actually a star-forming cloud called NGC 2467, as seen by the MPG/ESO telescope in Chile. Each eye is actually a cluster of stars, blowing huge holes in the gas cloud, forming what looks like two colorful eyes burning a hole into your very soul.

I have to note: this object is in the constellation of Puppis, the stern of a cosmic ship. So this really is a stern glare!

Original image: The cosmic Christmas ghost
Give a little bit of heart and skull 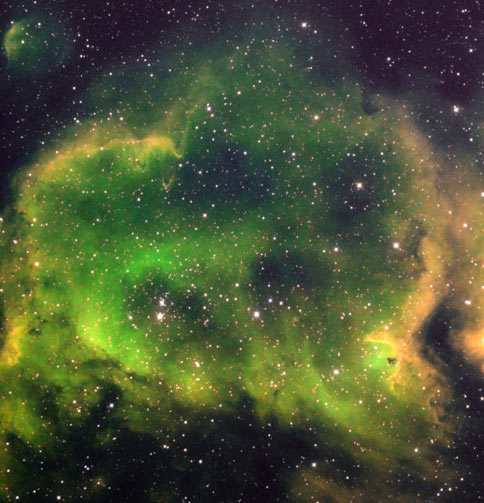 Glowing ominously green and yellow in this picture, the nebula W5 - nicknamed (seriously) the Soul Nebula - peers into your soul with its black eye sockets filled with pinprick stars...

But really it's a vast cloud of gas furiously churning out stars. The winds of subatomic particles and fierce light from those newborn stars carve out cavities in the gas, leaving what look like eye sockets and a nasal bone in a huge green skull.

I have to say... it looks a lot like the very creepy aliens called "The Silence" from Doctor Who.

This image was taken by astronomer César Cantú, who has dozens of other stunning astronomical photos on his site... but none quite so creepy. 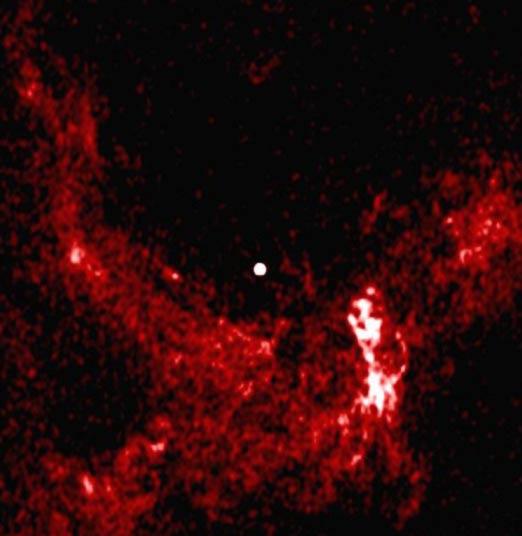 At the center of our Milky Way galaxy lurks a massive black hole, which, for the moment, is quiet. The surrounding material barely glows in radio waves, but there, off to the right... is that the baleful face of a woman, just a half a light year from the monster? Why is she sad? What is she mourning?

Perhaps she perceives her own fate: being twisted around, the gas making up her visage warped and wrapped as it circles that black hole over thousands of years, eventually, it may be, to take the final plunge into eterity. 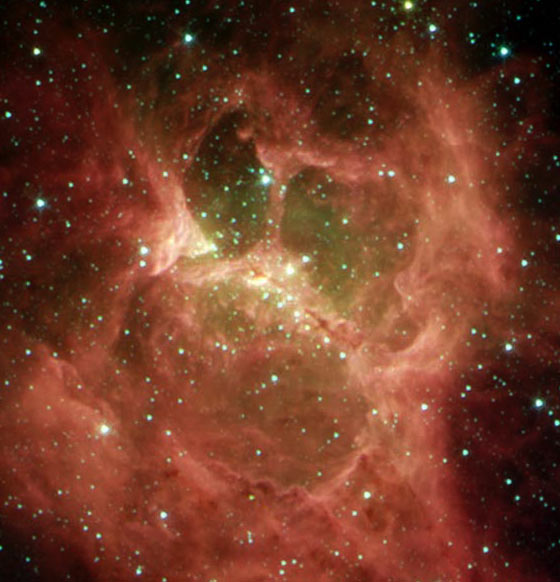 OK, I made that name up. It's actually called DR 6, which isn't nearly as much fun, especially at this time of year.

This is an infrared Spitzer Space Telescope image of the gas cloud, which is forming a dozen or so stars inside it. The eyes and mouth are bubbles in the gas blown by the winds of the newborn stars.

So in a way, it really is yelling. But at a distance of 4000 light years - and across the vacuum of space - there's nothing we can hear.