Icy swirls around a patient volcano

Just east of Russia and north of Japan lies a long series of island volcanoes called the Kuril chain. Over 50 volcanoes form this archipelago, which stretches for well over 1300 km (800 miles) in the western Pacific ocean. At the southern end is the bizarrely-shaped rectangle of Ostrov Shikotan, and in the winter icy waters swirl and flow around the snow-covered terrain: Breathtaking, isn't it? There are two extinct volcanoes on the island (it's still seismically active though) and, amazingly, two settlements as well. Of course, this picture, taken in February from NASA's Earth Observing-1 satellite, paints a very white and chilly picture. Satellite imagery in warmer times shows it to be much greener. There is some dispute over who owns the island; it's part of Russia but the Japanese claim it as well.

I suspect in the very long run, it doesn't matter. The Earth owns this parcel of land. The geology indicates it's been battered by eons of tsunamis and earthquakes. Humans may thrust out their chests and thump them, but the vast and mighty forces of a entire planet have squatting rights here, I think.

I love these satellite views of volcanoes from space, and I've collected quite a few into a gallery slideshow (I almost have enough to create a whole new set now, too). Click the thumbnail picture to get a bigger picture and more information, and scroll through the gallery using the left and right arrows.] 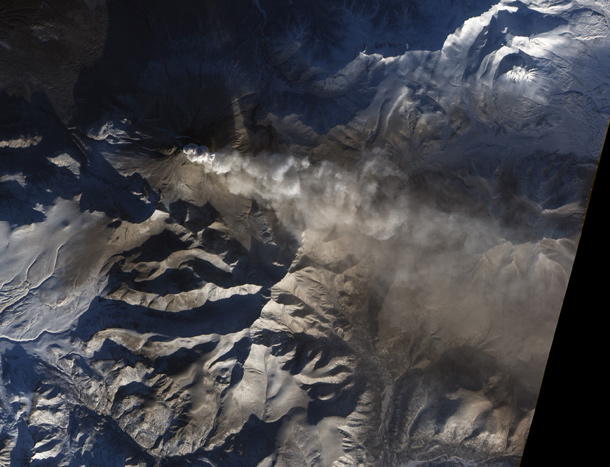 In the southern part of Kamchatka, Russia (known to Risk fans everywhere) sits the stratovolcano Kizimen. It's something like 12,000 years old, and in those millennia has covered the nearby mountains with ash. For at least the past 70 - 80 years it has been active, with one large eruption in the late 1920s.

In this image taken by NASA's Earth Observing-1 satellite, taken on January 6, 2011, you can see a long plume of ash and water vapor stretching to the east. The volcano has been rather gently erupting since New Year's Eve, so observations like this one are important in understanding the extent and nature of the activity.

I love the look and feel of this image; the terrain there is incredibly hostile, mountainous and remote. That's accentuated by the sunlight casting shadows across the region. This image was captured in mid-morning, just a few hours after local sunrise - you can tell by the shadows pointing north and west, so the Sun must have been south and east when this was snapped.

That whole area is lousy with incredible volcanoes... scan through this gallery and you'll see plenty more. 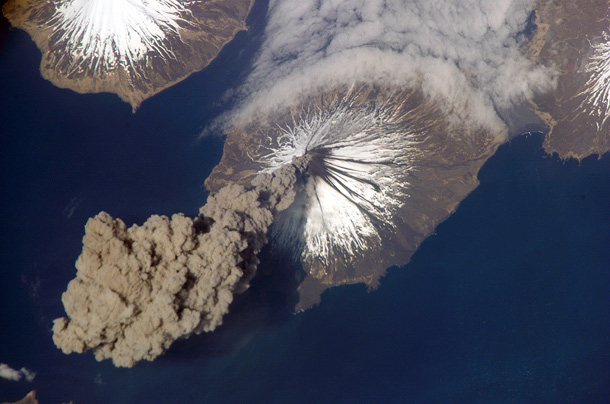 In May 2006, Cleveland Volcano in the Alaskan Aleutian Islands had a minor eruption of ash. The plume stretched southwest into the Pacific, and was caught in the act by astronaut Jeff Williams on board the International Space Station. He was actually the person to discover the eruption, seeing it as it happened while the ISS flew hundreds of kilometers overhead. 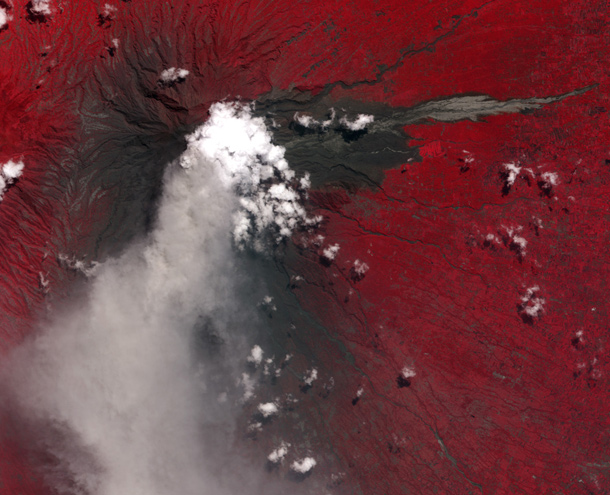 Mount Merapi is an active volcano in Indonesia. This unusual photo from NASA's Terra satellite uses infrared to map out vegetation, where leaves and other flora are highly reflective. This is colored red in the image, so that's where all the plants are. You can see where recent ash and mud flows have wiped out the plant life on the slopes.

Just outside the field of view of this picture is the city of Yogyakarta, which has a population of 400,000. As you can imagine, satellite tracking of volcanoes like this are critical when major population centers lie so close to them. 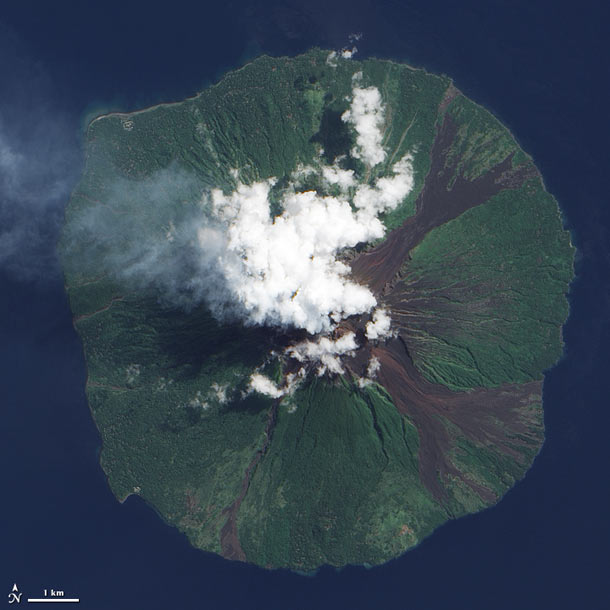 In Papua, New Guinea, lies the circular island volcano Manam, which is about 10 km (6 miles) across. It's a mildly active volcano, as you can see in this image from NASA's Earth Observing-1 satellite, taken in June 2009.

This is one of my favorite pictures of volcanoes from space, because it's almost seen straight down, the island is so nearly symmetric, and the plume so well-centered. It's exactly how I imagine these things should look from orbit! 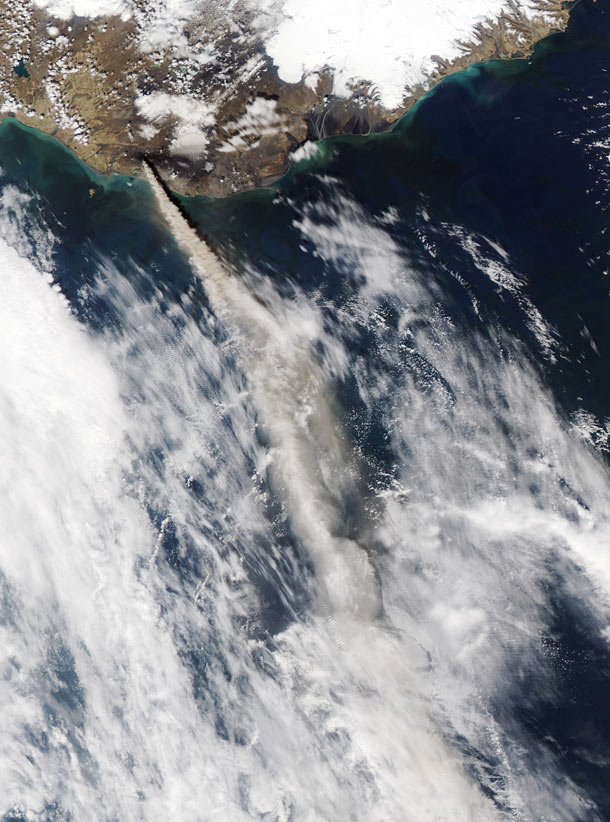 In early 2010, the Icelandic volcano Eyjafjallajokull started an epic eruption that would continue for months and disrupt the lives of millions of people across Europe and the world. The ash plume extended for hundreds of kilometers west and southwest, creating chaos by closing airports in London and other major cities.

This image, taken by NASA's Aqua satellite in May 2010, shows the plume reaching south toward England.

The long, curved plume of Eyjafjallajokull 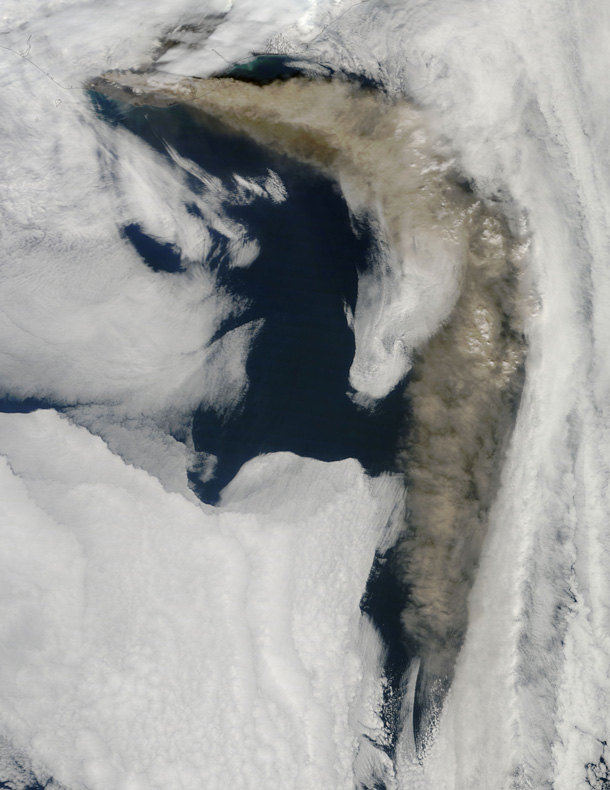 Taken on May 6, 2010, this image of the plume of Eyjafjallajokull from NASA's Terra satellite shows the thickness and reach of the volcano's ash cloud. While the plume did throw a monkeywrench into air travel in Europe, amazingly it doesn't affect the climate globally as other volcanoes can do. At its northerly latitude, the ash doesn't mix into the global air patterns like the eruptions from more equatorial volcanoes can. 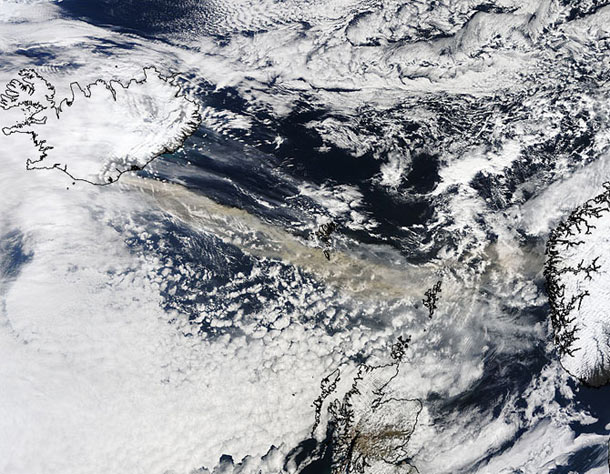 In April 2010, just three weeks after the initial eruption, the ash cloud from Eyjafjallajokull reaches across the north Atlantic to fall on the UK and Europe. NASA satellite imagery like this helped scientists track the volcano eruption, but also provided information to ground engineers and governments, so they could keep an eye on just what the volcano was doing to disrupt their lives. 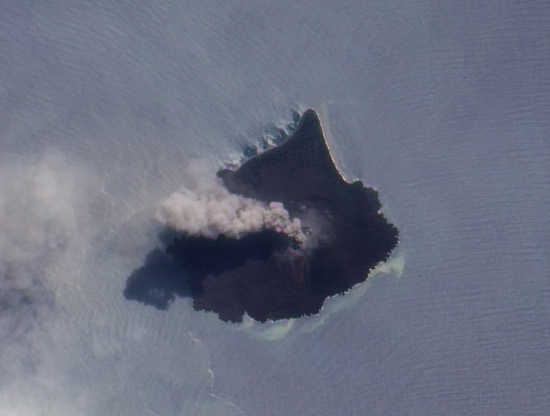 The Krakatoa eruption of 1883 was one of the most violent events in modern history. The volcano, located in Indonesia, tore itself apart in a series of catastrophic explosions that affected the entire planet, including cooling average temperatures by over a degree.

Over the past century, the volcano has been building itself back up, as you can see in this picture taken by the Earth Observing-1 satellite. It's over 2 km (1.2 miles) across now. It may be decades or centuries before another catastrophic eruption occurs, and in the meantime NASA keeps an eye on this sleeping giant. 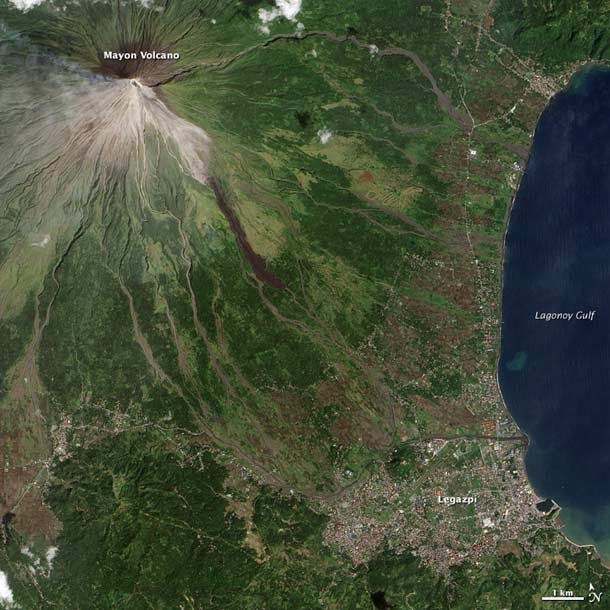 The Philippine volcano Mayon sits just a few kilometers northwest of the town of Laezgapi, which is home to 200,000 people. Recently it has been rumbling, so vulcanologists having been keeping a close eye on it.

Mayon has a history of violence - in December 2009 and January 2010, just after this image was taken, it had a series of minor ash eruptions - and has been the cause of many, many deaths. Scientists studying volcanoes like Mayon learn how to predict their eruptions, and can save countless lives... just in case you were wondering what science has ever done to help people. 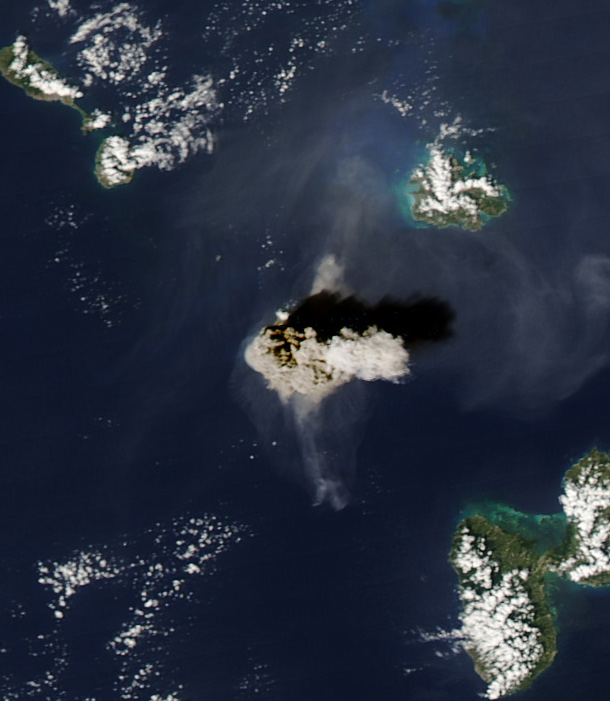 The island of Montserrat in the Caribbean is home to the volcano Soufriere, which has erupted violently in recent years. On February 11, 2010, the growing dome partially collapsed, sending a cloud of ash 15 km (8 miles) into the air!

NASA's Aqua satellite caught the collapse and subsequent eruption in this incredible picture. You can see the shadow of plume, and get a feel for the scale of this event.

The 1997 eruption of Soufriere killed 19 people on an island of 4000... showing that scientists predicting eruptions do in fact save many, many lives. 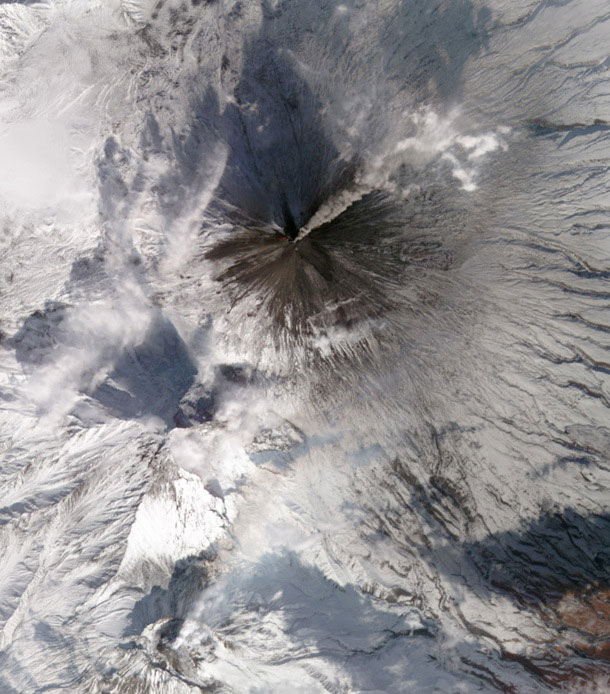 A lot of volcanoes are in tropical locales... but not all of them! I love pictures of simmering calderas surrounded by snow and ice, like this one of Klyuchevskaya taken by the Terra satellite. The volcano is in Kamchatka, Russia (well-known to players of the game Risk).

Klyuchevskaya erupts calmly and steadily, releasing the pressure underneath it continuously, instead of in a more dramatic explosion. That whole region is lousy with craggy mountains and volcanoes; click the link to get access to a huge version of this image and get an overview of this forbidding landscape. 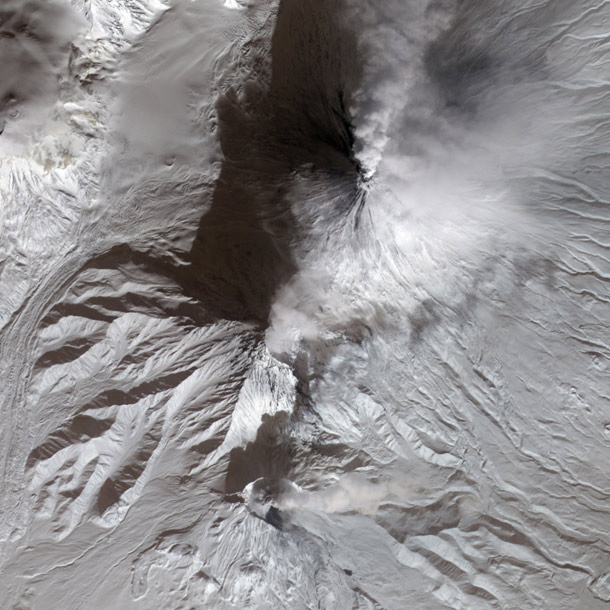 When the Earth has pressure leaks from its interior, it sometimes isn't confined to one spot. Klyuchevskaya, seen in the previous gallery image, is one of many volcanoes in Kamchatka, Russia. This image shows it leaking out gases and ash along with its little brother Bezymianny 10 km (6 miles) to its south.

Kamchatka from the space station 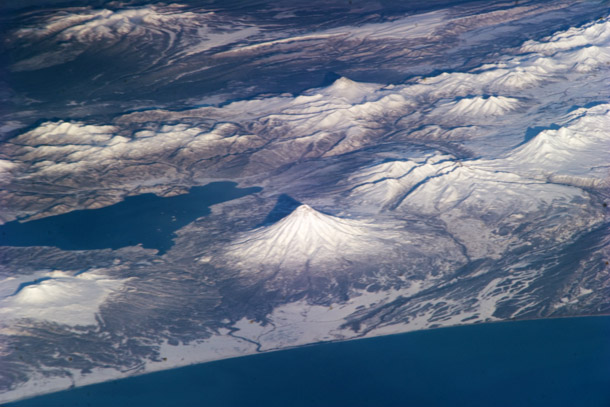 One of the advantages of having astronauts taking pictures from the International Space Station is that they can see objects from an angle. Earth-observing satellites point straight down, so oblique views are rare to non-existant.

In this stunning shot (taken on November 19, 2010) the volcanoes of eastern Kamchatka, Russia, are seen to the northwest from a distance of about 1000 km (600 miles). You can even see the shadows of the volcanoes from the morning Sun.

Many of these volcanoes erupted in the 20th century, though for some it's been a few centuries since they were active. The large body of water is Lake Kronotsky, formed when lava from the Kronotsky volcano (the large symmetric cone in the center) dammed a river. 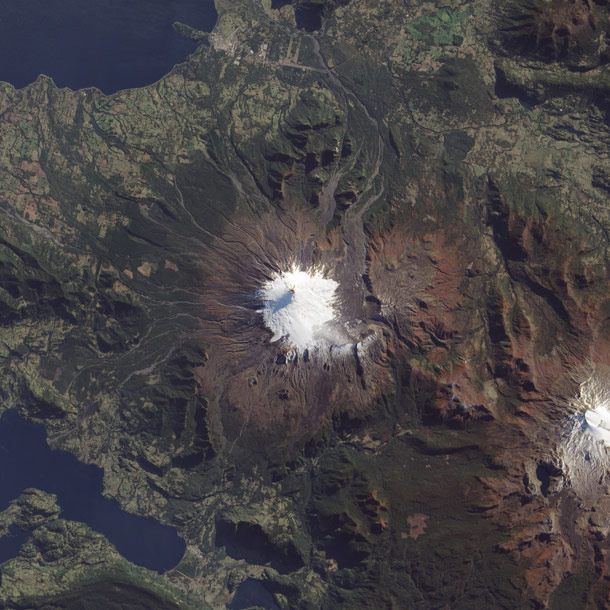 Chile is home to the nearly 3 km (9300 foot) high Volcán Villarrica, seen in this image by the Earth Observing-1 satellite. Remarkably, this isn't actually a photograph, at least as people usually think of them: it was built up line by line instead of all at once like a normal digital camera.

The detector on the camera is a single row of pixels. As the satellite moves around the Earth, the detector sweeps over the landscape, and the one-dimensional row of pixels can be stacked up to create a continuous picture of what's going on below. It's just one more way scientists can observe our home planet and learn how it behaves. Sometimes learning about Earth isn't obvious, and stepping away - and using unusual methods - is the best way to do it. 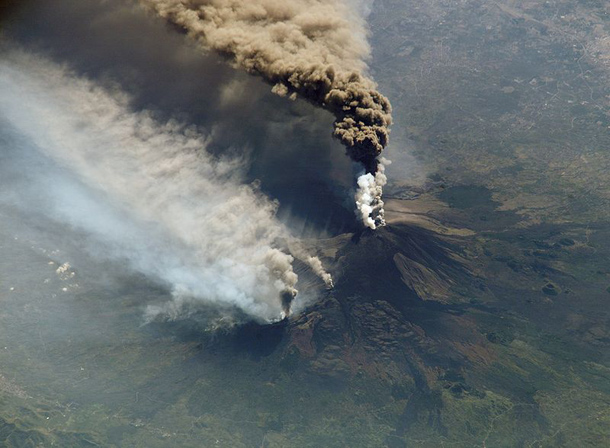 There are a handful of volcanoes in the world that evoke an immediate recognition, dormant or not. Vesuvius, Krakatoa, Mt. St. Helens. Certainly, Sicily's Mt. Etna is another. At 3300 meters in elevation, it's the largest active volcano in Italy... and by active, I do mean active.

In 2002, Etna erupted in a relatively large display of lava and ash. This view was taken by Expedition 5 about the International Space Station, looking southeast at a low angle. This eruption let loose a river of lava down the flank of the volcano which set fire to pine trees there; the dark plume is from the eruption, but the whiter ones are from burning pine trees. The plume from this eruption blew south and was reported as far away as Libya, nearly 600 km distant.

Unlike Earth observing satellites, which point straight down, astronauts on the ISS have the luxury of seeing things at an angle, providing a more natural - and in this case, more spectacular - view to our human eyes and brain. 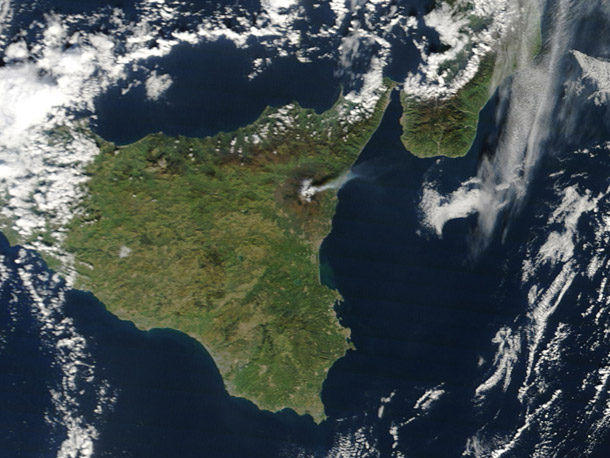 Etna continues to show its might, recently letting everyone know it's still very much alive. NASA's Terra satellite captured the plume from the summit as it passed overhead on January 11, 2011. This eruption was spectacular from the ground (as you can see in this video of the lava fountains), but seems almost serene and gentle from orbit.

Don't be fooled. The plume shut down a nearby airport (volcanic ash is composed of very spiky and sharp-edged glass and silicates which can be dangerous to breathe and can damage plane engines in flight) and causes many other snarls in the lives of Sicilians. 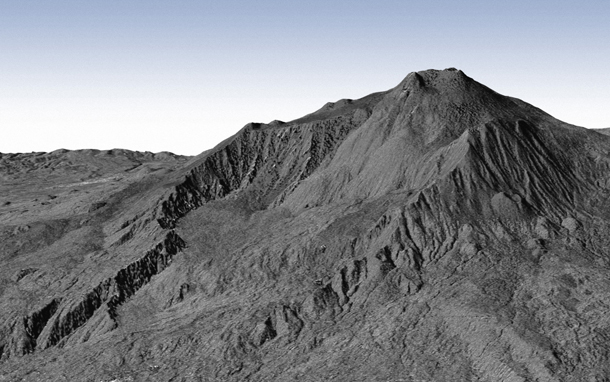 This really is an image from space: it's a 3D map of Italy's Mt. Etna taken using radar from space! Two satellites fly in close formation, taking turns sending down pulses of radar. The reflected signal is picked up by both satellites, creating very high-resolution data.

By precisely measuring the time it takes the pulses to hit the ground and reflect back, a map of the topography of the region can be assembled. This can then be used to make a model of the volcano in three dimensions, which can be viewed from any angle, even one mimicking the view from the ground.

Emily Lakdawalla at The Planetary Society Blog has the details on this amazing image, as well as a much larger version.