Note: At the bottom of this post is a gallery of more jaw-dropping pictures of volcanoes taken from space.

I'll admit it: sometimes I write posts just for the titles. But in this case I do have a very cool picture to go along with it: the volcano Batu Tara on the wee island of Pulau Komba in Indonesia, caught in a low-level eruption by NASA's Earth Observing-1 satellite on August 15, 2012: How awesome is that? The island really is tiny, just about 3 kilometers (about 1.5 miles) across. The volcano has had mild activity going on now for about six years. The ash plume is right smack dab in the middle, rising straight up toward the sky - note the shadow on the lower left.

But what amazed me right away was the tremendous scar in the island left by previous eruptions. The summit of the volcano is about 800 meters above sea level - about half a mile! Since the island is so small, that means the slope of that runoff is really steep, probably around 45°. Technically, such a geologic feature is called a "scarp"... and now my title hopefully makes sense.

I love these images of volcanoes seen from space. We get a perspective on them that's new, and amazing, and simply beautiful. And we learn so much! In another life, perhaps, I would've been a geologist. And hey, since the Earth's a part of the Universe, it all boils down to astronomy anyway. 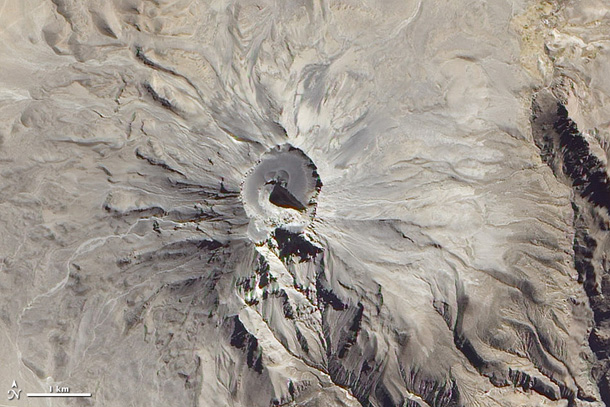 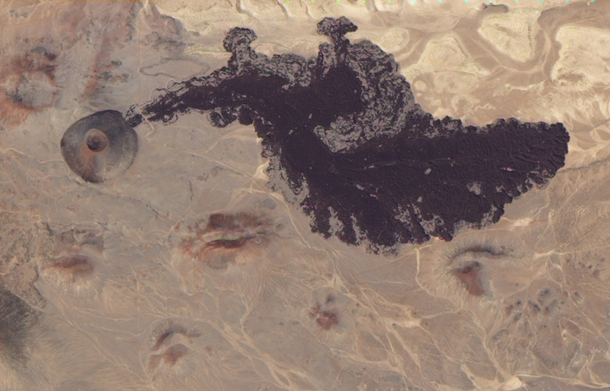 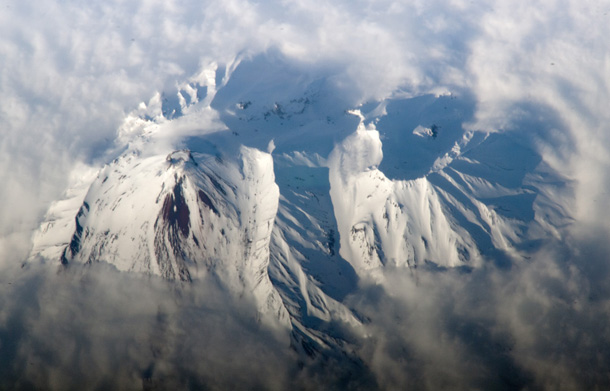 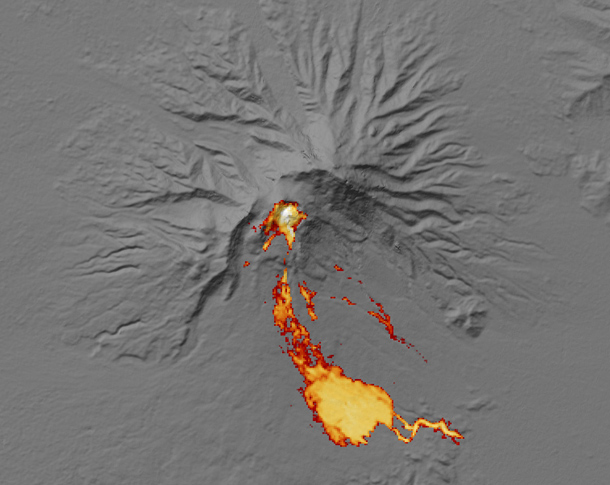 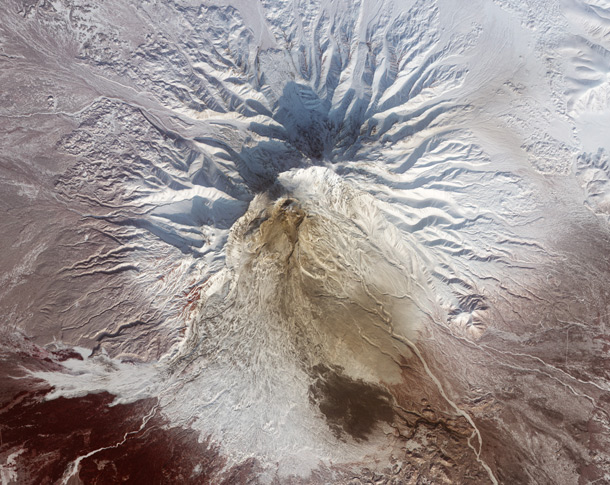 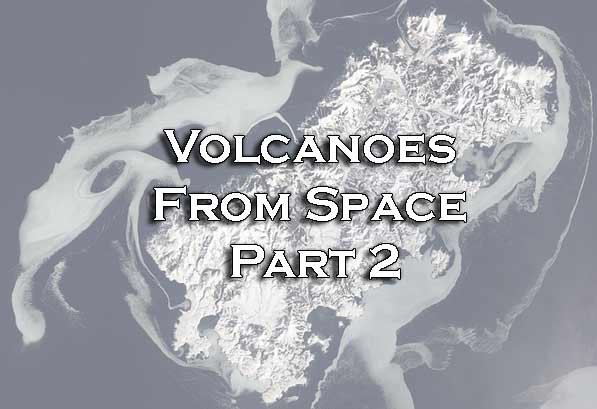 Volcanoes are among the most magnificent geologic structures on Earth, but sometimes the best view is from above Earth. This gallery features beautiful and fascinating images of volcanoes and eruptions taken from satellites orbiting our planet. It's actually the second such gallery I made; here is the first one (scroll to the bottom to see it). Click the images to see bigger versions and/or get more information about them. 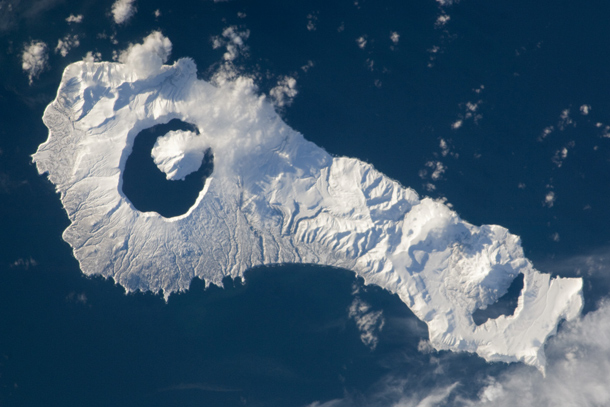 Onekotan island is a 50-kilometer-long volcanic double caldera in the Russian federation, in the western Pacific. A caldera is a depression that form when a magma chamber under the volcano collapses, creating the crater. The huge caldera on the left, called Tao-Rusyr, has filled with water since its collapse, and a new volcano - krenitzyn -- is now building up once again. This picture, taken in January 2011 by an astroanut on the International Space Station, is a study in contrasts. The frigid snow covering the volcanic island belies the terrible power and heat below.

Verdant volcano in a silvery sea 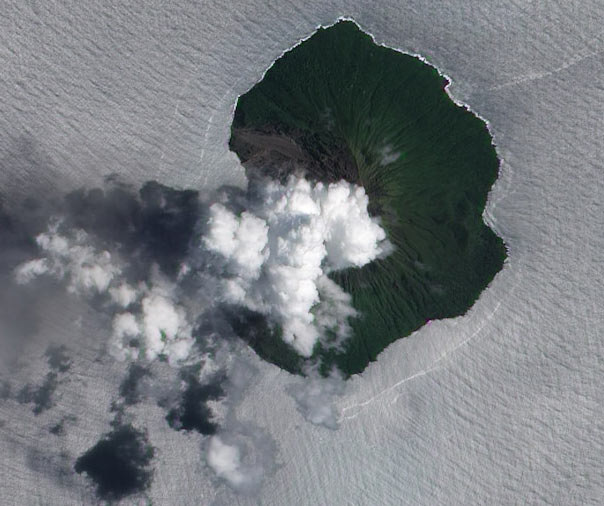 I love this shot of the south Pacific Tinakula volcano as seen by the Earth Observing-1 satellite. Tinakula is only sporadically active, and EO-1 caught a plume of steam and some ash from a mild eruption from February 2012.

But it's the water that makes this image so odd and lovely. It's actually natural color; the sunlight is glinting off the water, giving it that silver sheen. 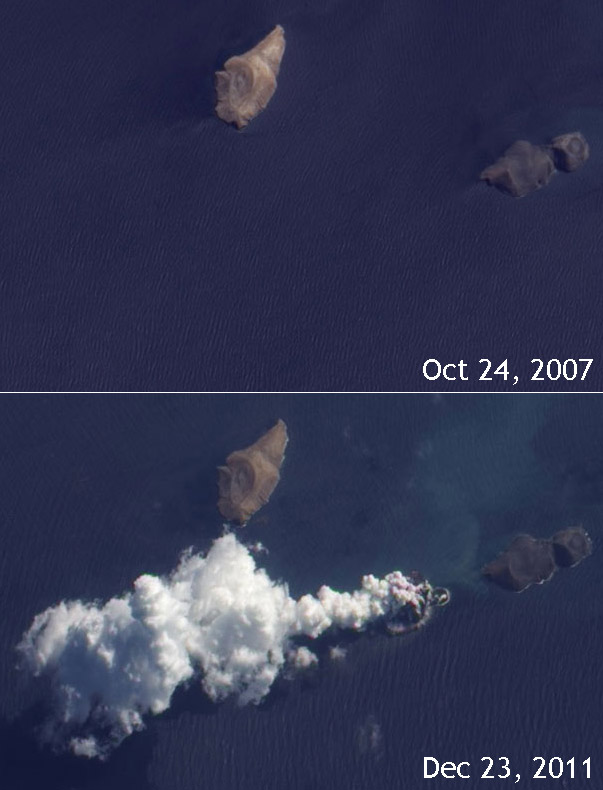 Off the coast of Yemen, in the Red Sea, are a chain of islands called the Zubair Group. Two of them, Haycock (left) and Rugged (right) are about a kilometer long. Things were pretty quiet there until December 2011, when suddenly a new volcano erupted from the water!

Holy wow! I had no idea that area was volcanic, but it turns out it's a rift zone, where tow continental plates are separating. Earthquakes are relatively common, and then of course entirely new volcanoes sometimes pop up, too.

Go with the (new) flow 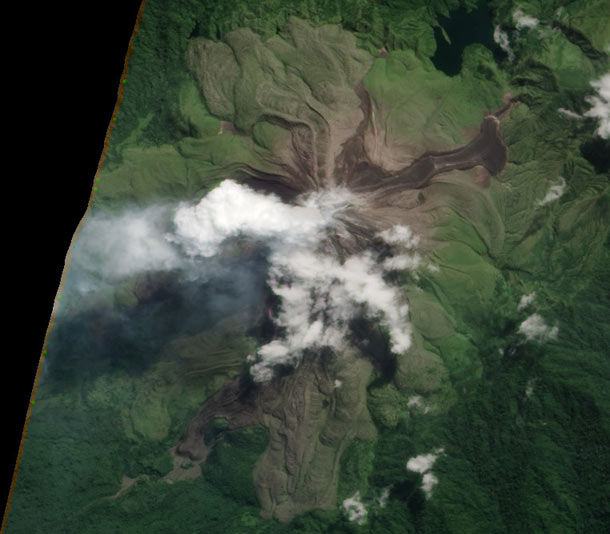 Bagana volcano is in a very remote part of Papua New Gunea. Located far from towns and cities. While it may hide from human eyes, it can't from our robotic ones: the Earth-Observing-1 satellite caught Bagana erupting in May 2012. The dark brown lava flow to the upper right occurred sometime after March 2011. It's so new there hasn't been time for vegetation to grow on it, even in that tropical climate. The volcano is very active; you can see several older flows that are tinged grren with plant life. Satellites are critical for observing and understanding volcanic activity, especially in hard-to-reach locations. 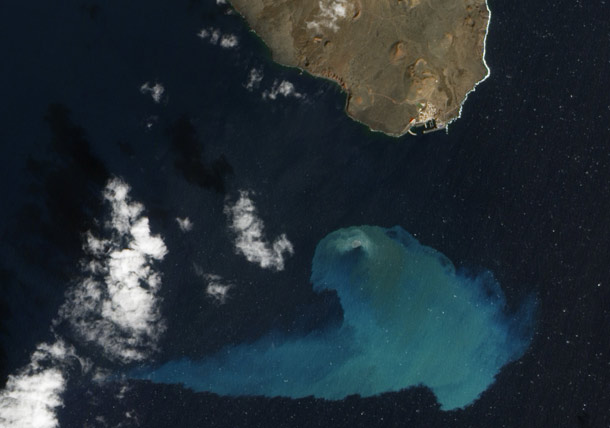 The Canary Islands are a volcanic chain off the coast of Morocco, and geologically are very much like the Hawaiian islands. They're still active, too: a new volcano is being born even as we watch! Off the westernmost tip of the chain, an as-yet unnamed volcano has been erupting since October 2011. As of March 2012, the peak is still more than 100 meters below the surface of the ocean, but it's growing. By 2014 or so we may have to add a new island to the map of the Canaries.

The icy swirls of Ostrov Shikotan 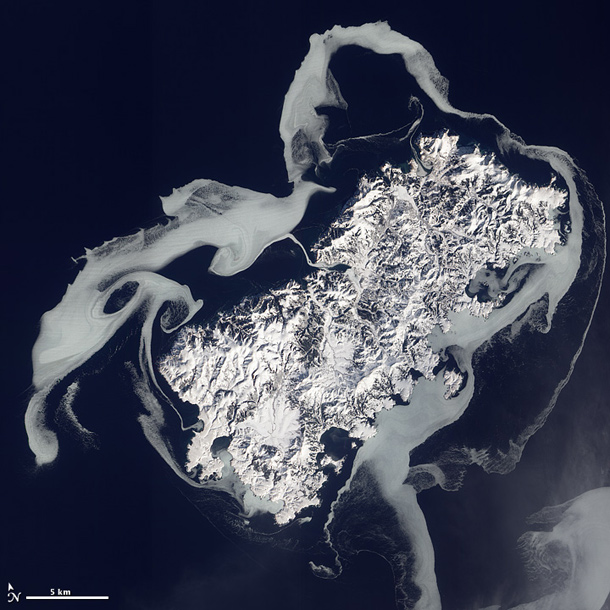 Off the eastern coast of Russia and north of Japan is an amazingly long 1300-km volcanic archipelago called the Kuril Chain. The weirdly rectangular Ostrov Shikotan is at the southern end, and has two extinct volcanoes on it. Tken in February 2011 by the Earth Observing-1 satellite, this photo shows icy water blown by opposing winds swirling around the island.

I love pictures of volcanoes from space, but this one is among my very favorites. 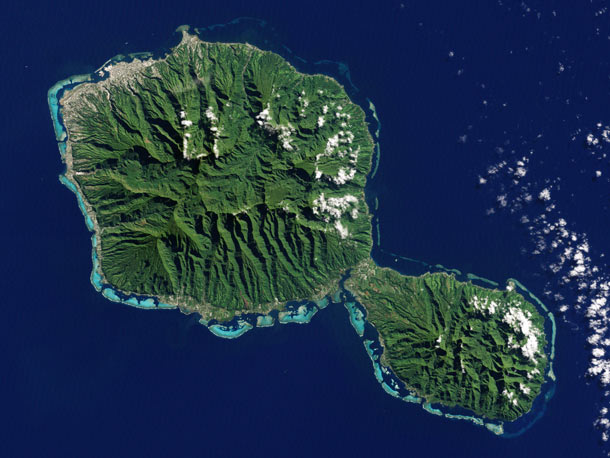 Tahiti is known as a tropical paradise for good reason, but the island is actually made of two volcanoes connected by a narrow and short isthmus. The larger one, Tahiti-Nui, is older, with lava rocks dated to 1.7 million years ago. Tahiti-Iti, the smaller one, has lava less than a million years old.

Both shield volcanoes have collapsed, and heavy erosion from rainfall has radically changed their appearance from all that time ago when they formed. This Landsat 7 image makes all that very clear... though I imagine from ground level it's far, far tougher to see.

Credit: NASA Earth Observatory image by Jesse Allen and Robert Simmon, using Landsat data from the U.S. Geological Survey.
Angling in on the edge of the abyss 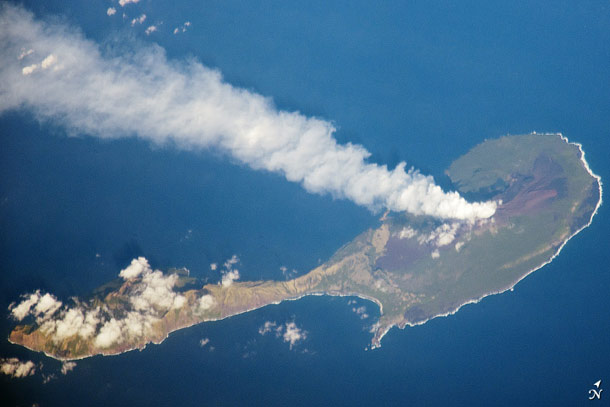 Some of my favorite shots of volcanoes from space are not from satellites, but from the International Space Station astronauts. Most satellites look straight down, but astronauts suffer from no such limitation. This view of the Pagan volcano in the Marianas islands was taken in March 2012, when ISS was hundreds of kilometers south of the volcano. The narrow island actually has two volcanoes; one at each end separated by that isthmus. This area is where the Pcific plate is subducting under (going beneath) the Phillippine plate, which causes a lot of volcanic activity. It's also, not coincidentally, the location of the Mariana Trench, the deepest point in the Earth's crust. 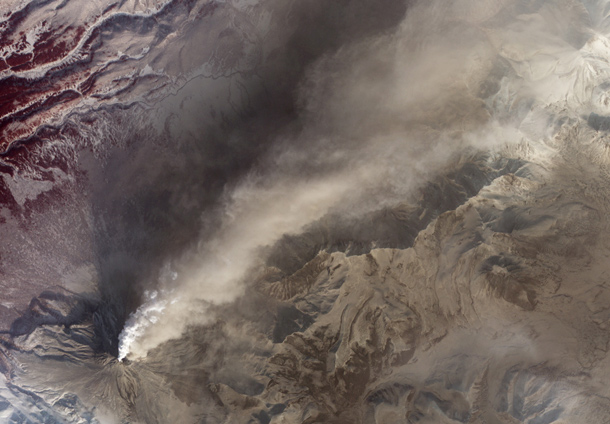 The Kamchatka peninsula is familiar to anyone who played the game Risk as much as I did as a kid: it's at the extreme northeast end of the Asian continent. It's also the home of many volcanoes, including Kizimen, which which has been erupting more or less continuously since December of 2010 -- after eight decades of rest.

The plume is white and tan, meaning it has water vapor in it as well as ash, and fresh ash falls line the flanks. These may also be from pyroclastic flows - torrential waves of burning hot ash which plow down the slopes at hundreds of kilometers per hour.