Sunlight and a spot of calcium

[Note: At the bottom of this post is a gallery of amazing pictures of the Sun from Earth and space!]

It's so easy to take the Sun for granted. Too bright to even look at, we tend to think of it as a featureless white (or, misleadingly, yellow) disk, bereft of detail. To give you an idea of what you're seeing, take a look at that sunspot in the lower right corner. See the roughly disk-shaped dark inner portion of it? Yeah, that's the same size as the whole frakking Earth!

Here's a zoom of the sunspot, taken in a way to show more detail: Holy wow! Sunspots are where the Sun's magnetic field breaks through the surface. Plasma -- that is, gas stripped of one or more electrons, allowing it to be affected by magnetic fields -- under the influence of that magnetic field cools off, so it doesn't emit as much light as the rest of the surface. That makes sunspots look dark in contrast, but if they were floating by themselves in space they'd actually be very bright (think of a flashlight in front of a spotlight if that helps). Look at all the tendrils and structure inside the spot; that's all due to the way the gas is flowing under the influence of the tremendous heat of the Sun and its powerful magnetic field. These images were taken with a very powerful camera called IBIS -- the Interferometric BIdimensional Spectrometer -- mounted on the Dunn Solar Telescope in New Mexico. The details of the detector are complex, to say the least (if you're an astronomy engineering nerd then you can read this overview of it). The important thing is that IBIS can take images of the Sun at phenomenally high resolution both spatially (it can see tiny regions clearly) and spectroscopically (it can take razor-thin slices of the colors of an object). The former is important to see small details, of course, making the images above so spectacular. But the latter is critical scientifically, because different elements emit light at different wavelengths. Being able to sample those colors at extremely high resolution allows a vast amount of physics to be teased out of images such as this.

The orange color of the first picture is actually a bit of a cheat: the camera used to take it (see below) can examine colors in extremely fine slices, and this is a very narrow region in what is actually the near-infrared part of the spectrum (854.2 nanometers). That's where the element calcium emits light very strongly, so in this image you're seeing how calcium behaves on the Sun. The close-up sunspot picture was taken at a different wavelength, though -- 543.4 nm to be specific -- so it shows different structures, different details of the Sun's surface. I've included the whole image here on the right (again, click it to get access to a hugely embiggened version). In it you can see the granulation in the Sun's surface caused by gigantic convection cells; towering columns of hot plasma rising up from underneath the surface of the Sun. They cool and then sink back down, like boiling water in a pot.

Right now, the Sun is ramping up toward its period of maximum magnetic activity in 2013 and 2014. As the magnetic field gets stronger and more chaotic, we can expect to see more sunspots, and more associated solar flares and other vast explosions from its surface. I'm glad there are so many solar astronomers poring over images like these, trying to understand better the seething, roiling power of this mighty star sitting so close to us. We owe our entire existence to it, but it's an uneasy relationship. The more we know, the better.

Here are some other amazing images of the Sun! Use the thumbnails and arrows to browse, and click on the images to go through to blog posts with more details and descriptions.

An eclipse seen from space! 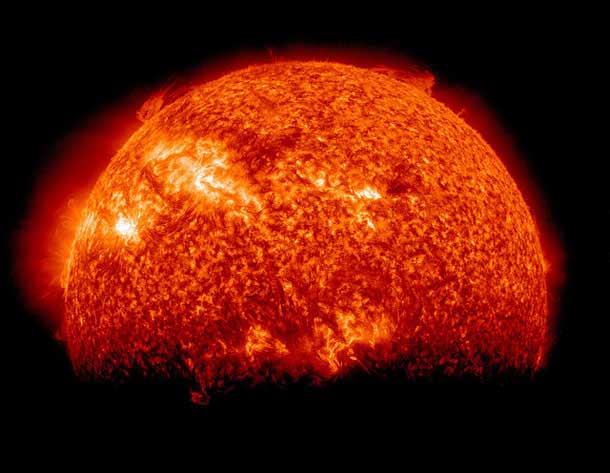 This unusual picture of the Sun was taken by the orbiting Solar Dynamics Observatory during one of the rare times the Earth gets between it and the Sun. What you're seeing is the limb of the Earth taking a bite out of the Sun! 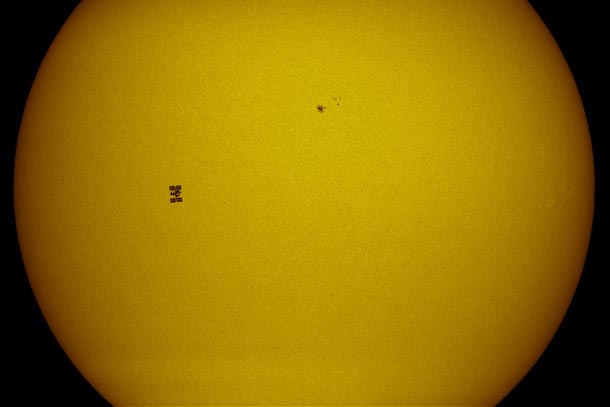 Amateur astronomer Thierry Legault captured the International Space Station as it crossed the face of the Sun. 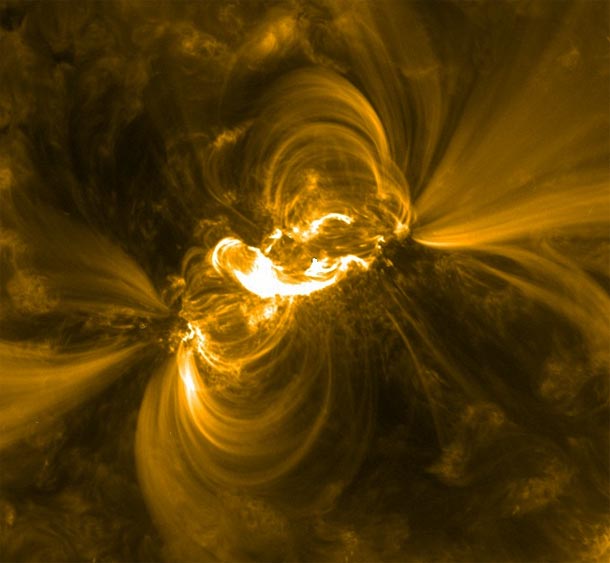 In February 2011, a sunspot group numbered 1158 blasted out a big flare, the first that was aimed at us here on Earth during the current colar cycle. It wasn't a big flare as they go, nor did it do any harm here, but it was still pretty impressive. This image in the far ultraviolet shows the looping magnetic field lines of the Sun and the bright flare leaping from them. 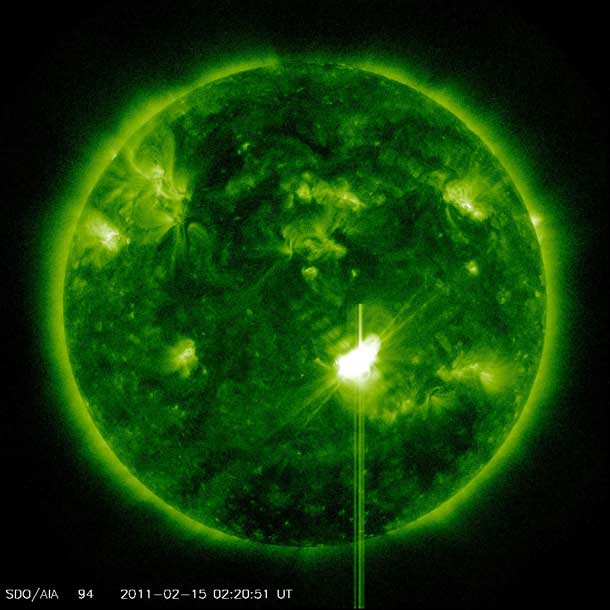 Just days after sending a flare our way in February 2011, sunspot group 1158 blew its top again, this time letting loose an X-class flare, three times more powerful than the first. Again, no damage was seen here on Earth, but this marked the first big flare of the solar cycle, and gave us a taste of things to come over the next couple of years of solar activity. 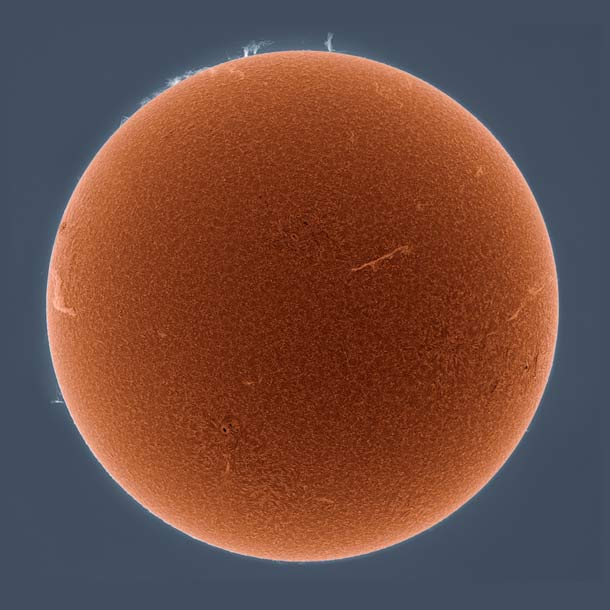 Amateur astronomer Alan Friedman captured this astonishing picture of the Sun in the glowing light of hydrogen. He reversed the image to give it a dramatic, eerie effect, producing one of the most amazing pictures of the Sun I've ever seen. 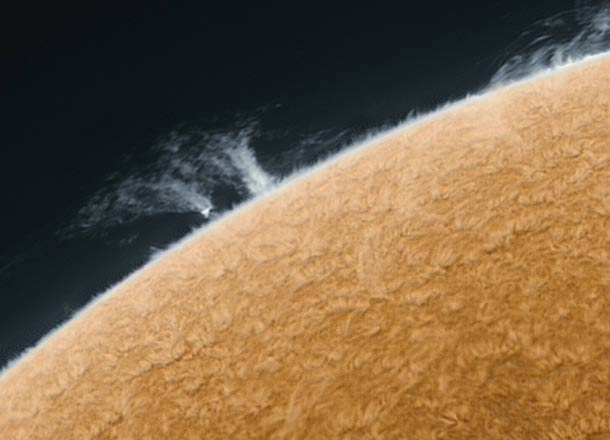 A close-up of the edge of the Sun's disk from the previous picture by Alan Friedman, showing eruptions called prominences. 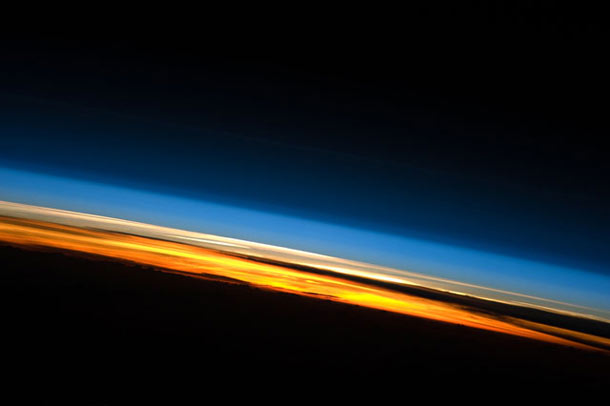 This is what sunset looks like if you happen to be aboard the International Space Station... and you'd get to see 18 of them a day! 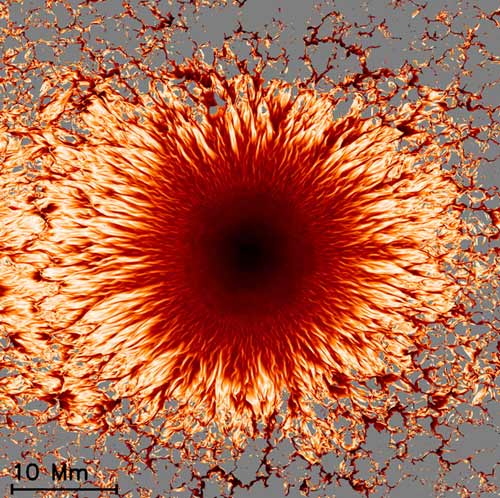 That may look like a sunspot, but it's actually a computer-generated image of one using extremely sophisticated code to model the physics in a spot.

The Sun gets loopy 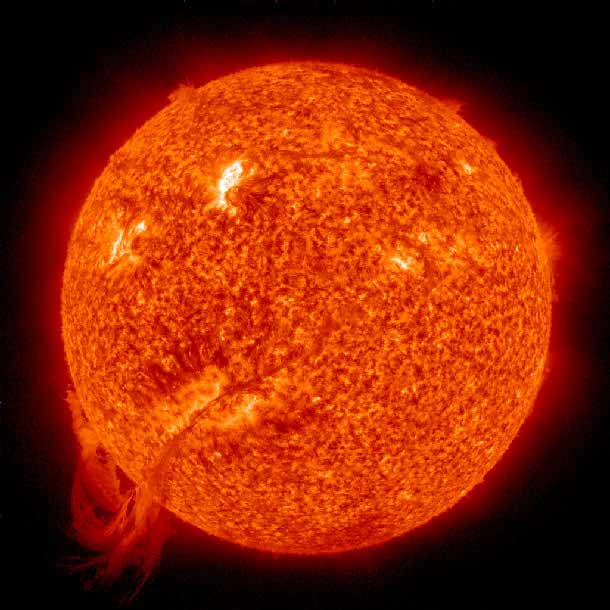 The gas on and in the Sun is ionized, which means it is stripped of one or more electrons. That in turn means they are enthralled to the Sun's magnetic field, which can be a bit, ah, prickly. In this case, a giant prominence erupted from the surface of the Sun, a towering loop of gas almost as wide as the Sun itself! These pose no threat to us here, but do give us information about the Sun's writhing magnetism... and are also very, very pretty. 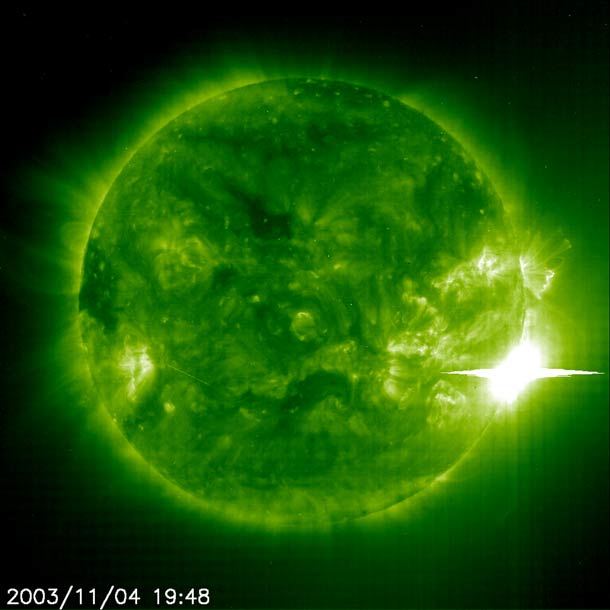 In November 2003, the Sun exploded with fury as a huge flare lit up its disk. That month marked many such flares, but this held the record for the single most powerful X-ray flare ever measured. 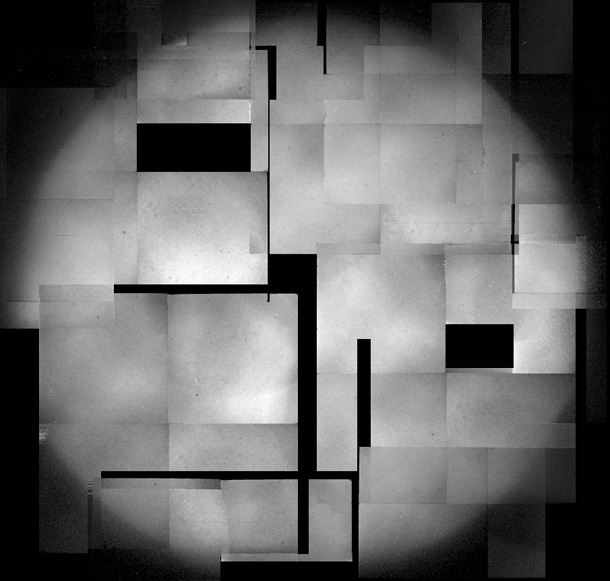 Most people would think that the Sun is too bright to observe with Hubble - and normally they'd be correct. But here was one time, just once, that Hubble did in fact look at the brightest object in the sky. Click the picture to see how this unusual picture was done. 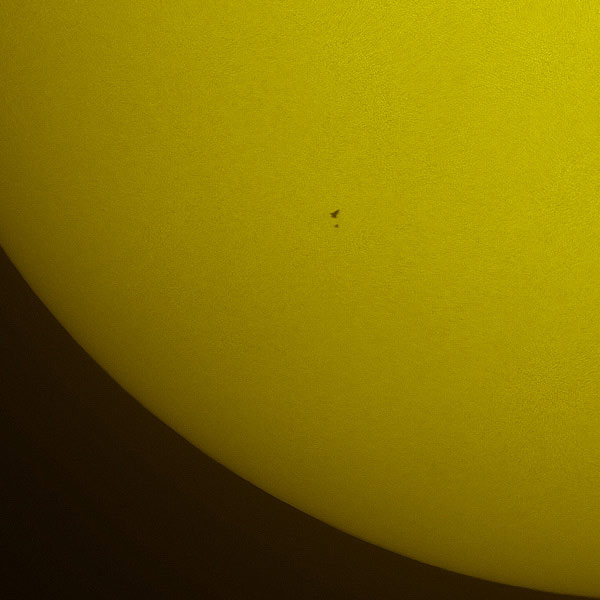 This may not look like much until you look more closely... and then you'll see the Space Shuttle Atlantis and the Hubble Space telescope silhouetted against the Sun. Another phenomenal picture by Thierry Legault. 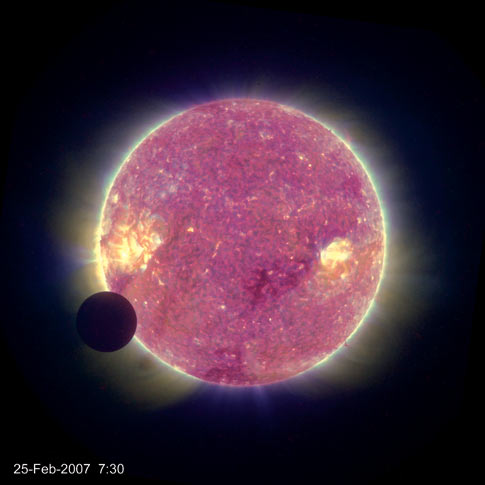 One of my all-time favorite picture of the Sun ever: the Moon transiting the solar disk as seen by NASA's STEREO satellite in space. 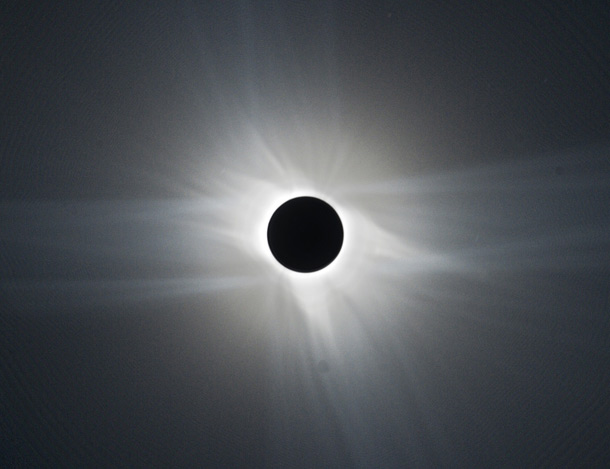 Astronomer Glenn Schneider is an eclipse chaser, and took this picture of a total solar eclipse from an airplane flying over the Pacific. 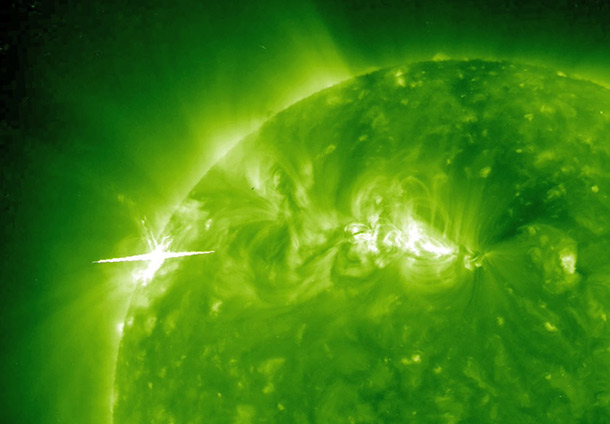 NASA's STEREO satellite caught a flare from the edge of the Sun blasting out X-rays in March, 2010. 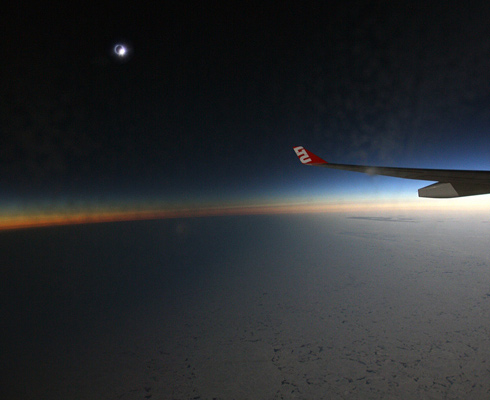 Astronomer Glenn Schneider caught this amazing shot of a solar eclipse at near totality while flying in a plane chartered for the eclipse. Note the wing of the plane, and the edge of the Moon's shadow on the ground! 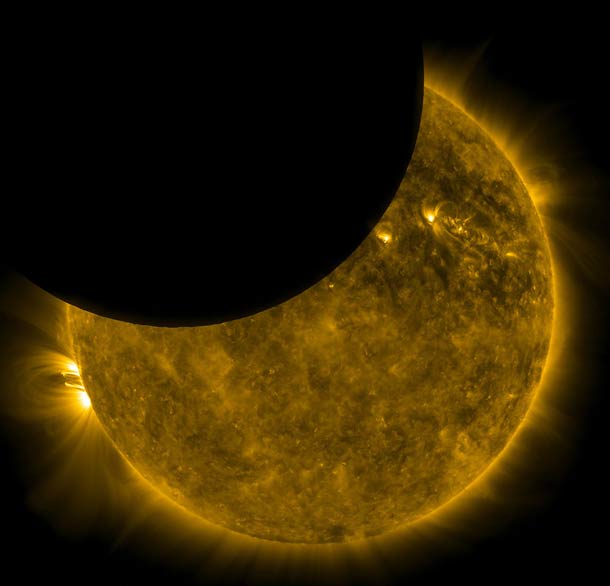 NASA's orbiting Solar Dynamics Observatory caught the Moon partially covering the Sun. Technically, this is a transit and not an eclipse. 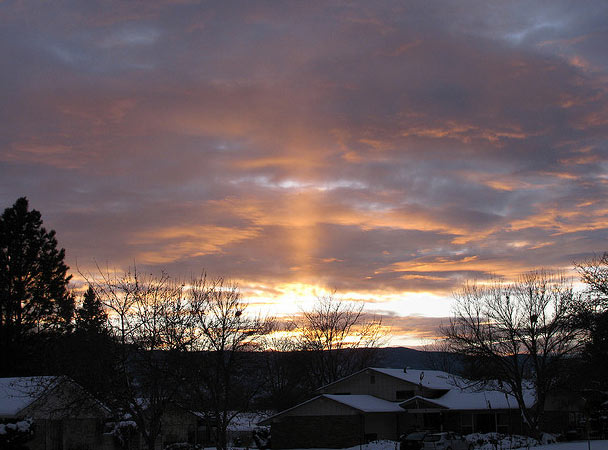 Your humble blogger took this picture of what is possibly a Sun pillar, an atmospheric phenomenon caused by ice crystals, focusing a beam of sunlight shooting straight up from the horizon.