An interactive simulation of geoengineering using data from GeoMIP.
If we started geoengineering in 2020, what would temperatures look like years from then?
Mouse over an area for more information. 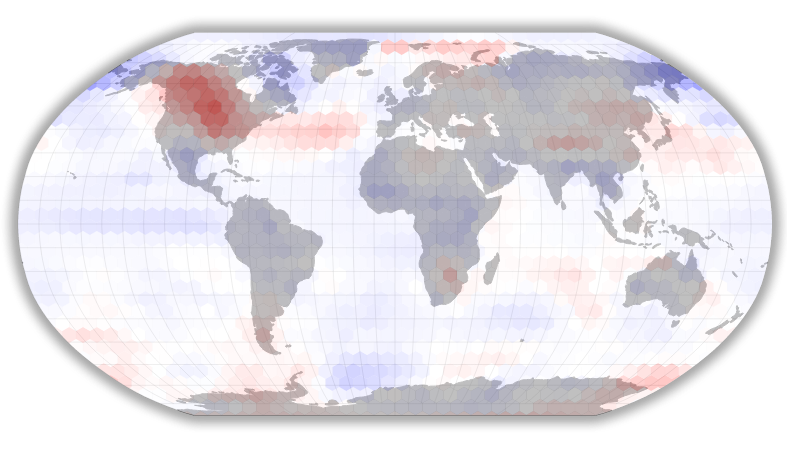 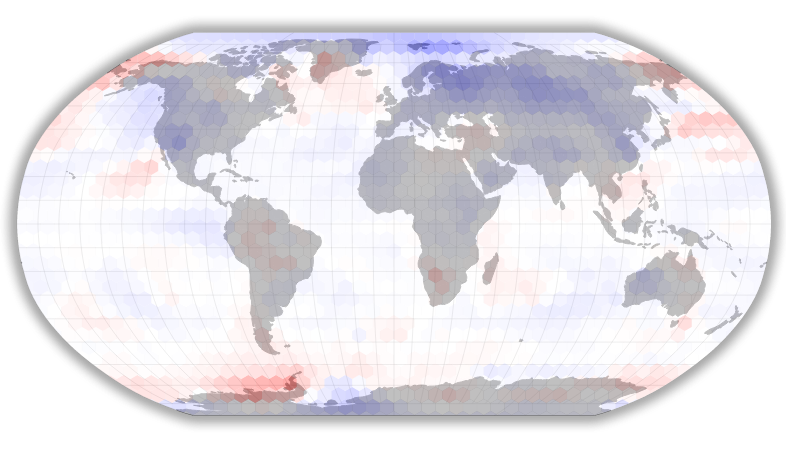 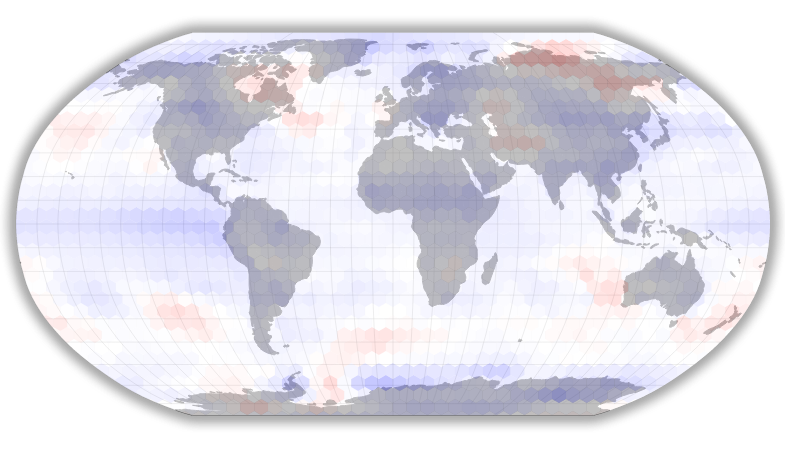 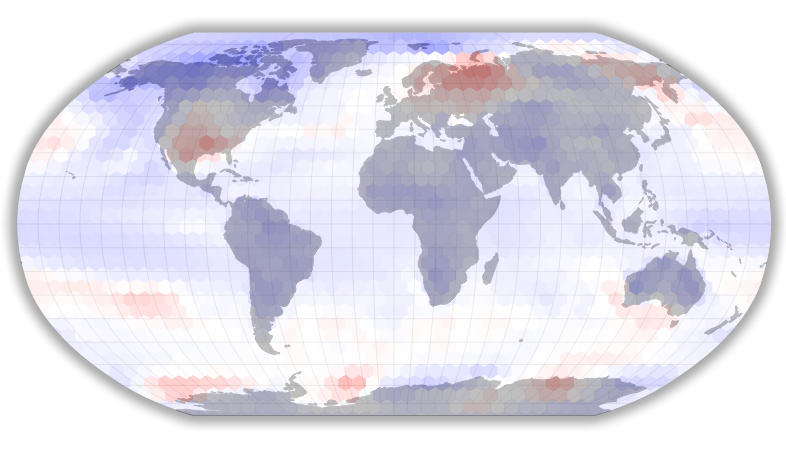 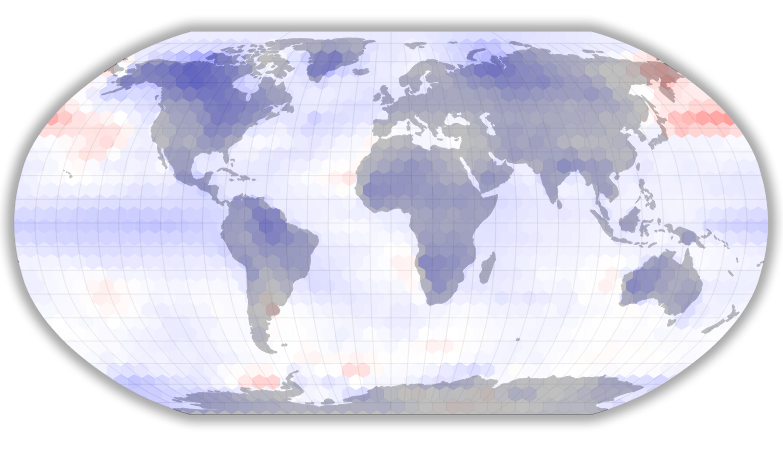 View on a larger screen for the full interactive graphic.
Interactive by Andrew Kahn. Data courtesy of GeoMIP.

Even as conversations about geoengineering—the idea of using technology to combat climate change—have increased in frequency and volume, real experiments have remained few and far between. Fortunately, a collective of data-oriented climate scientists have worked to collaboratively model some of the top proposals through the Geoengineering Model Intercomparison Project. Though they’re just simulations, these tests demonstrate how geoengineering might make a difference in the near future by revealing some of the changes it could make on a global scale. This is helpful for comparing different ways of implementing geoengineering techniques while also evaluating how they would interact with reductions in carbon emissions worldwide and other variables.

This interactive shows temperature data from one proposed approach to geoengineering, which has us spraying sulfates into the stratosphere beginning in 2020 to reflect more sunlight into space, bringing down global temperatures in the process. (This is known as albedo modification.) The sulfate load will increase annually in order to keep temperatures roughly stable. This scenario assumes that geoengineering won’t be the only strategy that we’ll take to fight global warming. Instead, it presupposes that CO2 emissions will peak around 2040, an eventuality close to the targets established by the recent Paris climate accords (though it was created independently).

Our interactive map shows how this particular approach to geoengineering might change temperatures over the course of five 10-year intervals. Where the model suggests geoengineering would make things cooler than they’d otherwise be, the map is blue. Similarly, where geoengineering is likely to make the world hotter (and in some cases it actually might!), the map’s hexagons trend toward red. As anticipated emission levels decline over the decades, many regions shift toward gray. Even as they do, however, some regions remain deeper blue, offering an important reminder that, even in the best-case scenario, albedo modification may be a very long time commitment.

It’s important to remember that these results are largely theoretical—and they represent just one of a host of possible scenarios at that. This isn’t necessarily how albedo modification or any other form of geoengineering would actually play out, even if we adopted it on a global scale. That said, it offers an impressive image of the wide-ranging potential impact of these technologies.

To get a better sense of what we were looking at, we spoke with Ben Kravitz, a climate scientist with the Pacific Northwest National Laboratory who helped orchestrate and organize the Geoengineering Model Intercomparison Project.

What does the actual modeling process look like from a practical perspective?

Kravitz: Our climate model is basically just this big hulking bit of computer code that you can tweak around. So if we said, We want to turn down the sun to represent geoengineering, you can do that in the model. If you want to incorporate stratospheric aerosols in the model you can do that by changing a certain file or changing a certain number inside the model. That’s what it looks like: It’s just about sitting down at your desk and cranking through the code and doing some hard work.

How accurate are the resulting models?

Every model has its strengths and weaknesses. I think it was [statistician] George Box who said, “All models are wrong, but some are useful.” With these climate models we’ve incorporated the best possible physics that we know how to represent. There are always some compromises that you need to make, because we don’t have unlimited computing power. For example, you can’t run the model at the size of a county—you have to divide it up into grid boxes, and that’s where things start to get tricky. We do the best we can. You have to use the right tool for the job. You have to ask the questions you think it can answer.

What are the most important questions about geoengineering for you right now?

We spend a lot of time looking at these geoengineering simulations, and we can say with reasonable confidence what temperature’s going to do if you do certain things, what precipitation’s going to do if you do certain things. Then the question for me becomes So what? Do people care about temperature? Do they care about precipitation? Maybe. They probably care more about agriculture and water scarcity and things like that. So the next question involves taking all that climate model data and interpreting it, working with the impacts assessment community to do a better job.

What would you want people to take away from a visualization of this kind?

One thing that’s really important to note is that climate change is probably pretty bad. It’s not something that we want to have happen. I’m not saying how climate change should be addressed—there’s mitigation, there’s carbon dioxide removal, there’s adaptation, there’s a bunch of other things that can be done, and I’m not assigning any priority to them. What I will say is that according to the model results, geoengineering reduces a lot of the problems associated with climate change. It also might introduce some new ones that we don’t necessarily know. Geoengineering is not perfect.

Along those lines, we were surprised to see that these models suggest geoengineering might make it warmer in some regions. Can you tell us why we’re seeing that happen here?

Some of that might just be [statistical] noise, and you might just get those warmings by chance. That’s not necessarily something to be trusted. Some of them you might trust, certainly, and you can dig in and find physical mechanisms for them.

It’s a tricky business just picking one model and saying Well, here’s what geoengineering might look like. It’s what that one model says in that one realization, but that’s not really what the answer is.

So we have a sense of how geoengineering might work, but where does this kind of information leave us?

This conversation has been edited and condensed for clarity.

This article is part of the geoengineering installment of Futurography, a series in which Future Tense introduces readers to the technologies that will define tomorrow. Each month from January through May 2016, we’ll choose a new technology and break it down. Read more from Futurography on geoengineering:

Future Tense is a collaboration among Arizona State University, New America, and Slate. To get the latest from Futurography in your inbox, sign up for the weekly Future Tense newsletter.