Outbreaks of vaccine-preventable diseases such as whooping cough and measles are increasing in frequency, and states across the country have introduced legislation to address the danger to public health caused by parents who refuse to vaccinate their children.

These state legislators are re-evaluating religious and “personal belief” exemptions. Many of these exemptions are claimed by parents concerned about a purported link between vaccines and autism (which has been debunked many times over) rather than by parents with sincerely held religious beliefs that prohibit vaccination.

The fact that vaccines are so effective works against the effort to limit exemptions. The vast majority of Americans do vaccinate, but very few parents who do so are passionate advocates in favor of immunization. Vaccines work so well that most people don’t have to give them a second thought, and few people have seen how badly children with measles or whooping cough suffer. The parents who do get involved in the political debate tend to do so when they investigate immunization rates at their children’s school and are shocked or dismayed by what they find.

However, anti-vaxxers turn out in droves. They are few in number—representing less than single-digit percentage points of most states’ populations—but extremely passionate. Their tendency to cluster means they remain a significant risk for supporting outbreaks of disease. They are organized by well-funded groups financed by family foundations. They still gather at rallies and fundraisers featuring disgraced doctor Andrew Wakefield, whose claim that vaccines cause autism was later found to be a complete fraud. Their voices are amplified by notorious anti-vax celebrity cranks such as Robert F. Kennedy Jr.

As a result of this disparity in activism, anti-vaxxers have been successful in defeating pro­–public health legislation that would eliminate some exemptions in a number of states, including Oregon, Washington, Vermont, and most recently, North Carolina. Bills in Texas, New Jersey, and California are still being hotly contested. Well-organized vaccination opponents flood legislators with a near-constant stream of materials of dubious scientific or legal validity. And, of course, Kennedy participates, traveling around to states in contention, promoting a conspiracy-theory documentary called Trace Amounts. This documentary focuses on the manufactured controversy surrounding thimerosal, an ethylmercury-based preservative that was removed from the vast majority of childhood vaccines in 2001. (Autism rates did not decline.) 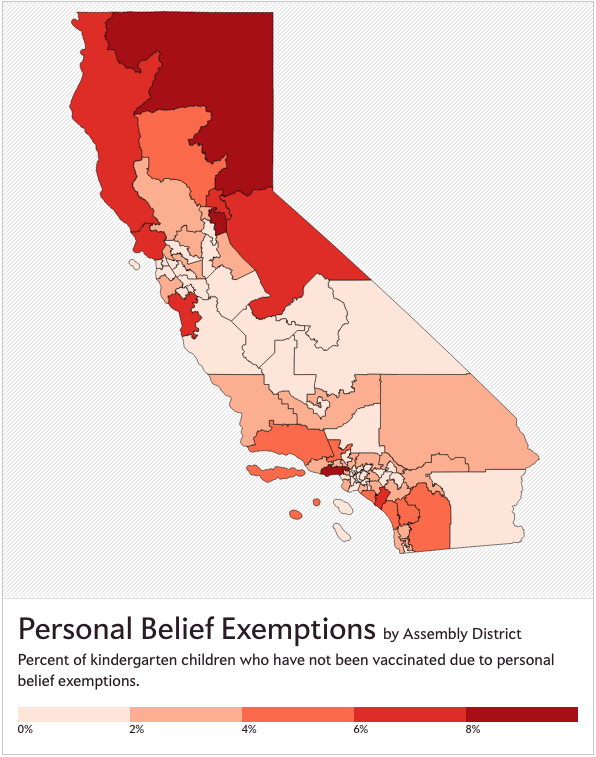 Percent of kindergarten children who have not been vaccinated due to personal belief exemptions.

One of the most heated legislative debates on this issue is currently raging in California. The legislation, SB-277, aims to eliminate the personal belief exemption. It is sponsored by Richard Pan, a California state senator and pediatrician who previously sponsored AB-2109. That bill, which required that parents opposed to vaccination meet with a doctor who would discuss their concerns and sign their exemption, was the first thing to make even a slight impact on California's steadily rising exemption rates. Many of the personal belief exemptions in child-care and day-care facilities—the youngest cohort tracked—were eliminated, but an approximately equal number of personal medical exemptions replaced the belief-based exemptions.

The findings confirm that anti-vaccination is a bipartisan issue. However, the investigation into wealth is telling. While strongly Republican districts maintain relatively high personal belief exemption rates across all income levels, rates rise sharply for strongly Democratic districts where the median income reaches about $68,500 or higher. Put another way, higher incomes appear to have a more pronounced effect in strongly Democratic districts. 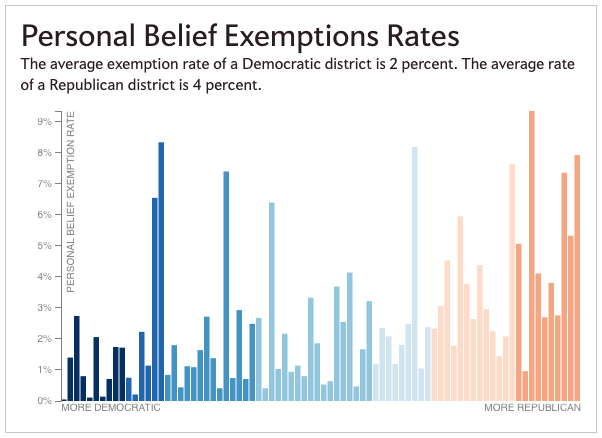 It’s important to note the difference between “undervaccinated” children, who are likely to live in poverty, and “unvaccinated” children. Voluntarily refusing vaccines comes from a place of extreme privilege, borne out of mistrust and misinformation. Parents of unvaccinated children pay for high-profile anti-vaccination doctors such as Bob Sears to sign their medical exemption forms; the vast majority of pediatricians strongly advocate for shots. Sears does not take insurance. He advocates that vaccine-fearful parents “hide in the herd.” That is, since most children are vaccinated, his patients’ children are at a relatively low risk of being exposed to a potentially deadly disease. It’s shockingly selfish and reckless advice, especially because infants who haven’t been vaccinated yet or children with legitimate medical reasons to not be vaccinated really do rely on the herd’s protection, and every voluntarily unvaccinated child puts these children at great risk. He plainly acknowledges that vaccines work; however, he also benefits when wealthy and ill-informed L.A. parents pay to see him. Sears writes, “I also warn them not to share their fears with their neighbors, because if too many people avoid the MMR, we’ll likely see the diseases increase significantly.”

The debate surrounding California’s legislation continues to heat up as both sides attempt to rally the grassroots. Unfortunately, Robert F. Kennedy Jr. is coming to town—he’s being given a platform at the Commonwealth Club in San Francisco on Tuesday and is rallying with Bob Sears on behalf of anti-vaccine parents in Sacramento on Wednesday.

Somebody please start a rumor that the latest strain of measles contains gluten  More...

The science is clear. Vaccines are safe, effective, and not in any way linked to autism. There is no scientific debate. However, there is a political debate, and it’s increasingly fierce. Potential 2016 presidential candidates such as Chris Christie and Hillary Clinton have stepped into the fray. And California pro-vaccine parents have been hammering home a message: The majority who vaccinate must realize that they need to stand up, call their representatives, and be heard.

The map for this story was produced by Chris Kirk.