Civil War historical markers: A map of Confederate monuments, and Union ones too. 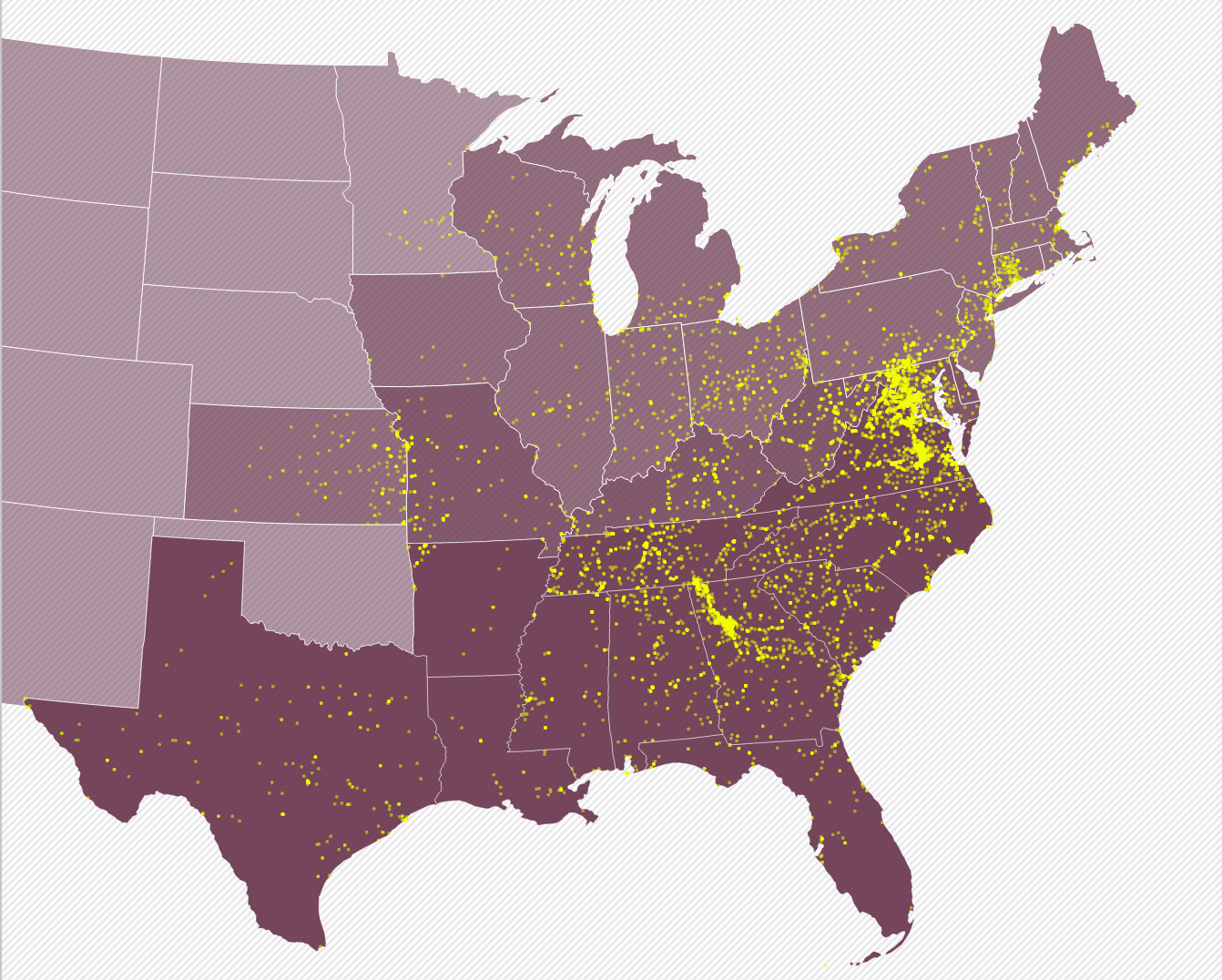 For the full interactive version of this map, access this page on a larger device.

1865
Click on any state to zoom in. Then, click on a marker for more information.
ZOOM OUT
Source: The Historical Marker Database. Interactive by Andrew Kahn.

The recent debate over the meaning of the Confederate flag has launched a broader discussion about how we commemorate the Civil War. As Jamelle Bouie wrote in Slate earlier this week, the flag is only the most visible emblem of the Confederate cause. Many of the criticisms that are leveled against the flag—that it is a symbol not of heritage but of oppression—are just as relevant to “the countless Confederate monuments that mark the Southern landscape, from equestrian statues of Robert E. Lee and mountain carvings of Thomas ‘Stonewall’ Jackson, to highways named for Jefferson Davis and schools named for Nathan Bedford Forrest, father of the Ku Klux Klan,” Bouie writes.

There is no comprehensive catalogue of all of America’s Confederate memorials. Wikipedia has a list, and Patrick Hogan at Fusion has started in on a new one, but both are incomplete. I’ve embarked on a similar project using the Historical Marker Database, a crowdsourced collection of “permanent outdoor markers” relating to historical events. There’s no easy way to know how close it is to being complete, but it is gigantic, with more than 13,000 entries related to the Civil War.

The problem with the Historical Marker Database is that it catalogs both Confederate and Union markers, and there’s no easy way to separate the two, at least algorithmically. (Many Union markers reside on former Confederate soil, and vice versa.) But there’s much to be learned from looking at how both sides have chosen to commemorate the war and how those commemorations have evolved across the decades. The animated map above shows how Union and Confederate markers accumulated over time and where. It also allows you to compare and contrast the language with which the two sections valorized their respective causes. As time progresses, monuments dot the map, accelerating at certain historical moments (around the Civil War centennial celebration, for example, which started in 1957).* The animation also highlights striking inscriptions from Union and Confederate markers. (Note: The interactive is designed so that you can watch it multiple times and see different inscriptions.)

Once the animation concludes, click on any state to zoom in and begin exploring the markers on your own. You might be surprised by what you find: a marker honoring a fugitive slave in North Carolina, for example. You might also be surprised by the tone of the markers. While some betray lingering enmity, others are strikingly conciliatory. As early as 1885, a Northerner placed a memorial to the Vermont men who fought at Winchester, Virginia, with this inscription:

Honor the Brave. Erected to commemorate the Bayonet Charge of the Eighth Vermont Vol’s. led by Genl. Stephen Thomas. Sept. 19, 1864. Committed to the care of those once a brave foe. Now our generous friends.

The monuments tell the story not just of Lost Cause sentimentality, but of a nation perhaps all too eager to put the conflict, and its underlying causes, behind it.