Creationism in public schools, mapped. Where tax money supports alternatives to evolution.
Health and Science has moved! You can find new stories here.

A large, publicly funded charter school system in Texas is teaching creationism to its students, Zack Kopplin recently reported in Slate. Creationist teachers don’t even need to be sneaky about it—the Texas state science education standards, as well as recent laws in Louisiana and Tennessee, permit public school teachers to teach “alternatives” to evolution. Meanwhile, in Florida, Indiana, Ohio, Arizona, Washington, D.C., and elsewhere, taxpayer money is funding creationist private schools through state tuition voucher or scholarship programs. As the map below illustrates, creationism in schools isn’t restricted to schoolhouses in remote villages where the separation of church and state is considered less sacred. If you live in any of these states, there’s a good chance your tax money is helping to convince some hapless students that evolution (the basis of all modern biological science, supported by everything we know about geology, genetics, paleontology, and other fields) is some sort of highly contested scientific hypothesis as credible as “God did it.”

Click to enlarge. For the full interactive map, use a device with a larger screen. 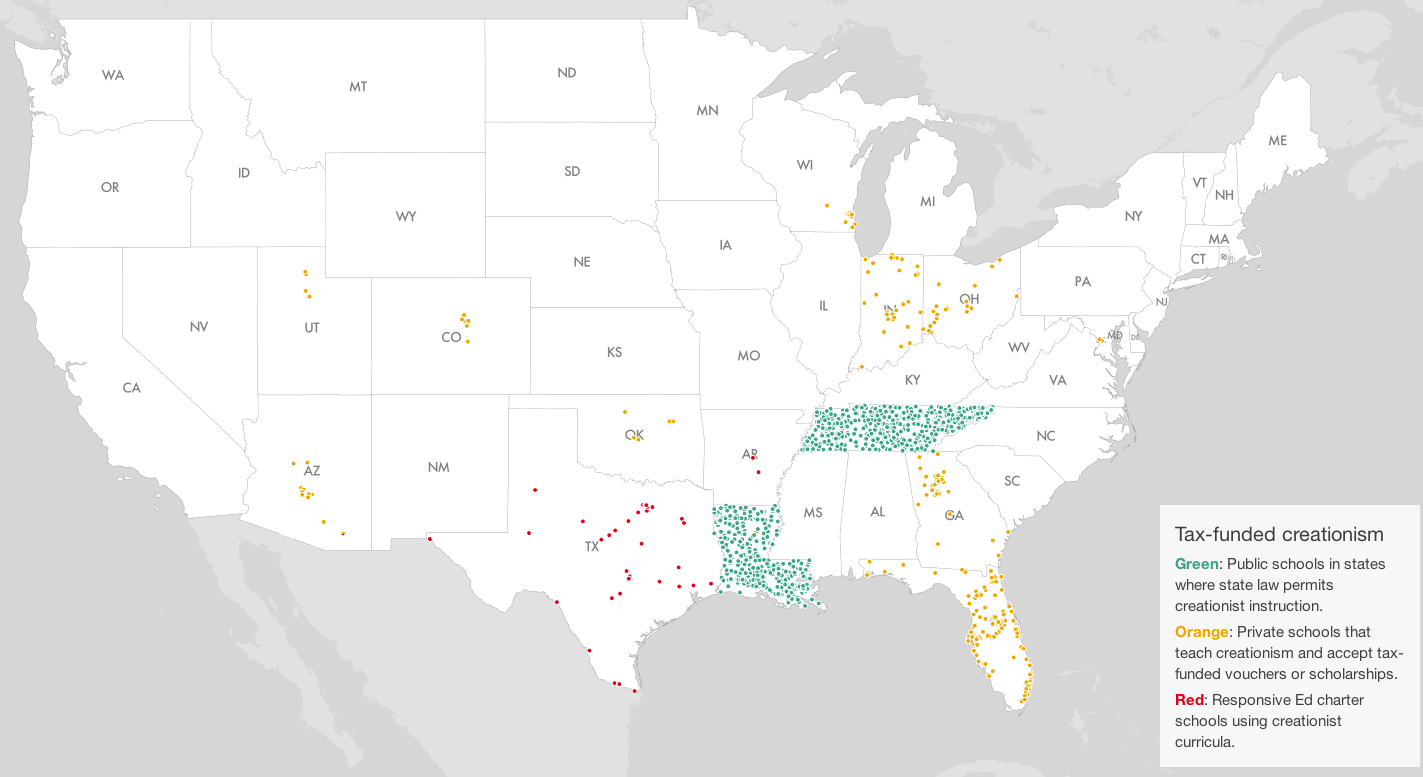 Arizona: As many as 15 schools that teach creationism may be participating in the state’s tax credit scholarship program for disabled children or children attending underperforming schools. (Arizona has not released a list of private schools that have received students on this scholarship.)

Florida: At least 164 schools teach creationism while participating in the state’s tax credit scholarship programs for disabled children and children from low-income families.

Indiana: At least 37 schools teach creationism while participating in the state’s voucher program for children from low-income families.

To quote Bobby Jindal, Republican Governor of Louisiana and Bachelor of Science in Biology from Brown University, one year ago this week: "We've got to stop being the stupid party.  More...

Louisiana: The Louisiana Science Education Act of 2008 allows teachers to use “supplemental textbooks and other instructional materials to help students understand, analyze, critique, and review scientific theories in an objective manner,” specifically theories regarding “evolution, the origins of life, global warming, and human cloning”—in effect, allowing creationist material inside classroom. It’s no coincidence that the Discovery Institute, a creationist think tank that provides such “supplemental textbooks,” helped write the bill, which the American Association for the Advancement of Science described as an “assault against scientific integrity.”

Ohio: At least 20 schools teach creationism while participating in a tax credit scholarship program for children in underperforming public schools.

Tennessee: A 2012 state law, like Louisiana's, permits public school teachers to teach the “scientific strengths and scientific weaknesses” of theories that can “cause controversy,” specifically citing evolution, global warming, and cloning, thereby providing legal cover for teachers who want to forward creationist pseudoscience.

Texas: The state’s largest charter program, Responsive Ed, receives $82 million in taxpayer money each year, but that hasn’t stopped its schools from adopting a creationist curriculum that seriously misrepresents the science of evolution. These materials wrongly portray the fossil record and the age of Earth as scientifically controversial, assert that there is a lack of “transitional fossils,” and claim evolution is untestable.

Washington, D.C.: At least three schools teach creationism while participating in a tax-credit scholarship program for children from low-income families.

Wisconsin: At least 15 schools teach creationism while participating in a Milwaukee or Racine voucher programs.

Correction, Jan. 27, 2014: This article's headlines originally suggested that thousands of public schools in Louisiana and Tennessee are teaching creationism. While those schools are permitted to teach creationism, it is unclear how many are actually teaching it, and the headlines have been updated to reflect this.