On the way out of Iowa, a spokesman for the state GOP gave me a small rubber chicken with the website called BraleyChicken. It was, he explained, part of the effort to further the negative brand of Democratic Senate candidate Bruce Braley, an effort to a make sure that every voter knows that Braley complained about a neighbor who let chickens roam onto the yard of his vacation home.

Oh, sorry, I forgot. The spokesman was Jeff Patch, a former Politico reporter who became an activist, later moving to Iowa. He broke the chicken story at the Iowa Republican. The next day, he said, he climbed on board with the state party. You can see why, because Patch wrote a hell of a narrative.

"From the Classic Deli and Ice Cream Shoppe to the Casey’s General Store," he started, "folks are talking about the hometown boy-turned liberal trial lawyer-turned congressman and his bizarre legal battle with a neighbor over her chickens." In the story that followed, littered with chicken puns, Patch reported of "$1,700 in legal fees" incurred by the homeowners asssociation after Braley launched a "a contentious legal battle."

The lake netted a $1,748 profit from hosting a triathlon. Braley’s legal fees nearly wiped that out. Two employees received raises from $8 to $9-an-hour. Braley’s legal fees could have put an extra $70.50 in those employees’ pockets each month over the next year. The association needed to purchase new tires for a tractor that cost $1,100. Again, Braley’s litigation caused the association to waste its resources battling a sitting U.S. Representative over a few birds instead of other priorities.

Phil Rucker, the great Washington Post correspondent, traveled to Iowa to explain exactly what happened. Republicans are generally thrilled that the story is out there—it's baffling that Braley pursued this during an election year, and after enduring his gaffe about the unsuitability of a "farmer from Iowa who never went to law school" becoming head of Judiciary. (Absent that gaffe, it's hard to imagine this follow-up story getting the same play.) But Rucker's reporting suggests that at least one element of the story was overplayed.

Braley didn't actually sue. The "legal battle" was Braley's call to the association's lawyer, which the attorney recalled as Braley telling him he wanted to "avoid a litigious situation" by talking out whether the chickens violated the community's ban on animals that were not "household pets."

“At no time did I ever — ever — threaten a lawsuit or threaten litigation. Never. And anybody who says that I did is not being truthful,” he said. “This was a personal dispute between my wife and a neighbor because chickens were on our property all the time.”

He added, “I just reached out to somebody I knew expecting to get a phone call back and instead this thing blows up. And I think it’s obvious why, because people who don’t want me to be the next senator from Iowa will stop at nothing to try to drag my family through the mud.”

Dale Howe, who lives next door to the Braleys, said she made a similar complaint to the association board. “I did not think that they should be roaming around,” Howe said of the chickens. But, she added, “We didn’t have the same type of problems [the Braleys] did because they didn't leave their droppings in our yard.”

Even if Braley didn’t threaten a suit, some around Holiday Lake bristled at his tactics.

Right, and Braley's family screwed up by failing to handle this directly with the animals' owner, Pauline Hampton, who went on to build a fence and then tell anyone who asked about how the animals were used for children's therapy (maybe I'm an East Coast elitist, but therapeutic hens?), and has been interviewed for a possible American Crossroads ad. Here's how Crossroads currently dramatizes the situation: 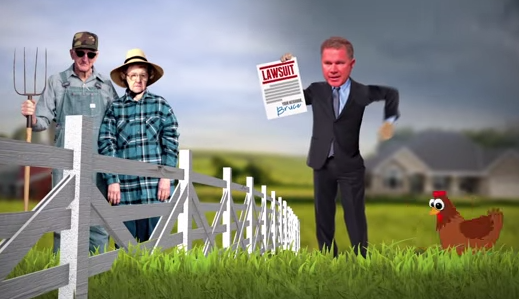 There was no lawsuit, no farm, and no fence. Just a well-told story that took advantage of how a guy mishandled the problem of chickens shitting on his lawn. So well-told that the Washington Post put it on A1 with no reference to how it started—with a reporter-turned-activist who broke it and then joined the state party to really take the wood to Braley.