Will.i.am is not what's wrong with Meet the Press.

On Sunday afternoon, I found myself among the not-insignificant number of Americans confused to see Will.i.am on Meet the Press. Armed with an iPhone 4, I took this photo of the proceedings. 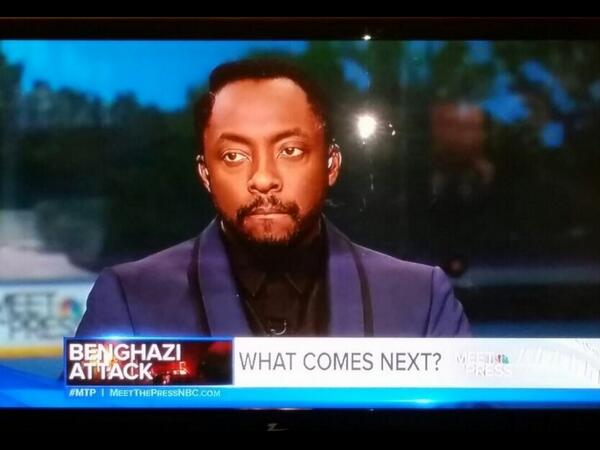 Within a few hours, hundreds of people had shared that twitpic, usually with an aside about how much it revealed about Meet the Press's well-reported troubles. Only a week had passed since Paul Farhi profiled the show and host David Gregory, which ironically shifted the narrative from "why is MTP so lame now?" to "whoa, NBC hired a 'psychological consultant' to find out how to maximize Gregory's reach?"

Forget about the psychological consultant. Why, as Dylan Byers asked, aren't any of the big three Sunday shows filling the cultural void left by the death of Tim Russert? Byers' reported analysis predicted the Will.i.am guest spot.

“We’re bringing in different voices and broadening out our coverage to cover all kinds of things,” he said. “We still have newsmaking guests every week, but we also work hard every week to do different things.”

Gregory spoke of “adding on layers” in the form of “big conversations about religion, foreign events and societal trends.”

“The core of the show has always been your Washington fix, we’re a Washington-based program. But I do think we’re adding on layers, changing the experience, making it more interesting."

Look, I'm a shmuck with a podcast and Gregory is a well-traveled reporter who's interviewed basically everyone, but I feel this gets at exactly the wrong definition of "interesting." More interviews, more voices, does not automatically lead to more "interesting" content. It leads to more content in less time—and less exploration of each subject covered. It robs the Sunday shows of their old advantage, their ability to lock subjects in a well-lit room for most of an hour and boil away their talking points.

For an example of what I mean, look at the old MTP. Look at, for example, the interview Russert did with John Edwards right after the former North Carolina senator announced his final presidential campaign. Russert was dealing with a credible presidential candidate, though not a front-runner. He started by asking Edwards whether his vote in favor of the Iraq war was "the most important" one he'd cast. Then he played a 2002, gravitas-building clip of Edwards arguing for the war. ("We know that he has chemical and biological weapons today." Oy.) Then he asked if Edwards still believed this. Then he asked why Edwards was so wrong. After Edwards muttered some stuff about being misled, Russert reminded him of the Democrats and establishment Republicans who got it right at the time. Then Russert reminded Edwards that he'd been a member of the Intelligence Committee. And then they went to commercial and returned to keep talking about Iraq and the Bush doctrine.

Compare this with Sunday's MTP interview with Rick Perry. His 2012 presidential campaign made him the most famously scatterbrained man in politics since Dan Quayle, but Perry is still talking about a 2016 presidential bid. That was the hook for the segment, but it was just that—a segment of a longer show. Gregory hardly got or took the time to bear down. His questions.

"You've got 273 people on death row in Texas.  After what happened in Oklahoma, do you expect more challenges?"

"Is it appropriate for a pause in our national discussion and application of the death penalty, the president talking about bias, uneven application, soul-searching questions that he'd like the country to take. Do you agree with that?"

"The latest jobs report has the creation of 288,000 jobs in April. That's the most in more than two years. But here's another stat, which is the labor force shrinking but 806,000 in April. People getting out of the business of looking for a job. Of those two stats, what best represents the Obama recovery, the Obama economy?"

"Do you give this president credit for more robust growth that we've started to see after the winter months? In your state of Texas, you look at poverty. People who are suffering, who may be without hope. In the United States, that rate is 15.9%. it's higher in Texas, it's 17.9%."

"Tim Pawlenty, who you ran against in 2012 was part of that presidential ticket there before he dropped out, he was on MSNBC this week. He said this about how Republicans ought to live with this minimum wage fight... Are the politics shifting in your party on that?"

"You ran in 2012. A lot of people thought that was a botched effort on your part. How do you get a second look now? So what went wrong?"

"So when I ask you how to get a second look, what do you want to say to your party to say, 'Look, here's the path to getting the White House back. And here's what Rick Perry can do to get us there'?"

"In Texas, big state, there's a lot of political figures. You've got Ted Cruz making waves, looking like he's going to run in 2016. And when the former President Bush who said this week he'd like for his brother Jeb to run for president, you know George W. Bush, the president, very well, having then succeeded him as governor. Is there room in Texas for all of you in the presidential race?"

This is a catalog of wasted opportunities. Gregory got Perry to weigh in on whether he'd run for president and whether states should maintain the death penalty, topics he has dealt with many times and could easily bury in talking points. He did not follow up on the aspect most likely to make Perry uncomfortable—whether nonwhites were unfairly targeted by the death penalty—even though the president of the United States had just said so.

Most unfortunately, Gregory didn't challenge Perry by playing back or quoting anything Perry had said in the past. Anything about, say, the immigration stances Perry took in 2012, the ones that really torpedoed his campaign before the "oops" gaffe? Nope. All Perry had to answer for was the fact that "a lot of people thought" he botched the 2012 campaign, and that there might be a lot of 2016 presidential candidates. There wasn't even a mention of polling in Texas that shows voters more excited about a Cruz 2016 run than another Perry run. But there was a mention of how Texas is a "big state," so, points for that.

So the interview was too brief to make Perry uncomfortable and too shallow to knock him off message. This was not just one problem for one show on one Sunday. As the "pack a show with segments!" standard has spread, marquee guests have gotten used to quick sprint interviews that they can ace with some pablum. The main reason that Chris Christie's post-election Sunday show interviews in 2013 were so lame and unrevealing was that Christie asked for, and received, only seven minutes on each show. But it didn't jar, because each show was able to toss the segment into their current formats, in which tedious panel discussions fill out the hours like corn meal fills out a brick of scrapple. How did this happen? Who, in the history of ever, has wanted to hear less from the people who run the country and more from Harold Ford?

All I'm saying is: Lay off Will.i.am. He's not the problem here. What you want is longer and more probing interviews with more seemingly boring people.