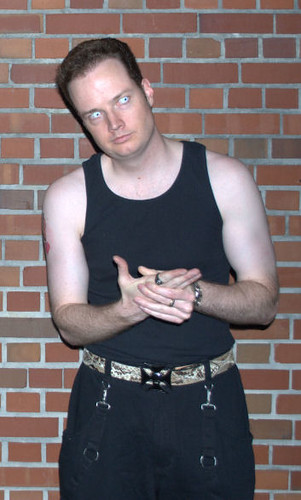 This was an unusually difficult April Fools' Day for Jake Rush. In the morning, reporter Peter Schorsch published comprehensive evidence that Rush, who'd announced a primary challenge to Rep. Ted Yoho just one week earlier, was a bona fide LARPer. Without wanting to rip off the fine reporting of Schorsch or of Hunter Walker—and without being able to access online discussions that have been deleted to spare Rush yet more embarrassment—I might suggest that the rescued messages about a Rush character sporting a "rape face" or fantasizing about snorting a line off a machete while receiving fellatio pose obvious problems for a conservative candidate.

But I've got to admire how Rush is spinning the story. In a long statement to the press, Rush details his history in theater and improv, provides a recent photo of himself dressed, innocently, as the Flash, and argues that the LARP revelation is a dirty trick.

“The opposition should be ashamed with their game playing; this is yet another example of the buffoonery that always follows Ted Yoho. In an attempt to deflect from his moral and political failings, the opposing campaign shamelessly believes he needs to impugn Jake’s character with innuendo, misleading photos and gossip,” says campaign manager Remzey Samarrai.

“Clearly, Ted Yoho and his supporters want to talk about anything other than his abysmal congressional record: a vote to fund Obamacare, a vote for the budget, a vote to cut Veterans benefits, and an isolationist foreign affairs policy. None of which liberal-libertarian Yoho is addressing, ” says Alex Patton, general consultant to the campaign.

“Bottom line - There is nothing wrong with being a gamer. It ’ s kinda nerdy, but North Central Florida deserves a legitimate debate on the issues instead of Ted Yoho ’ s usual sideshow distractions, ” concludes Jake Rush.

Yes: The campaign is going forward, and running at Yoho from the right. Yoho, who won his own seat in a primary upset, actually voted to defund the ACA whenever he got the chance, even when his leadership begged him not to; the accusation that he "voted to fund Obamacare" is based on Yoho's vote to support the Ryan-Murray budget. This was the budget that "cut veterans' benefits," so Rush is taking three bites out of one apple in order to paint Yoho as a "liberal." If this works, and a fetish-fantasizing LARP enthusiast is able to defeat a Republican by portraying him as a liberal, the era of the Tea Party primary has reached a new and unexpected height.

(Photo borrowed from Peter Schorsch at SaintPetersBlog, and originally from a now-defunct LARP page.)